Skip to main content
on November 10, 2008
So I am in the Killzone 2 Beta and wowee is it fun. Had a few issues the first couple of attempts, but I finally got into a game and didn't leave for a few hours.

The first thing I noticed is that they emulate the leveling/reward system from recent major games, but make it their own. You can change your template or weapons as you get them. Much luck other games as well you have grenades, a main weapon and a sidearm to choose from.

The game has an auto team mode so everything is balanced and the games we were playing last night were faction battles. The ISA and Helghast face off against each other and the server is set to rotate the game play modes selected. Basically the server has 6 game modes (or less if the host chooses) and as the factions battle it cycles through the modes until one faction or the other wins.

Very cool stuff, if your faction wins you get a multiplier bonus to your XP...nice touch that.

More details soon, but I am loving this game, as much as I loved the 8 player co-op in Resistance 2. 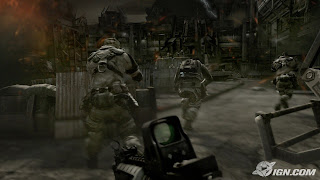