Skip to main content
on January 27, 2009
So I took a day off yesterday and was determined to play some vidjeo games. The result? Well taken from my Xbox 360's blog:

Jer1ko rocked out with 4,550 points. That is a profit of 200 points over last time! He played Tales of Vesperia adding 2 achievements, Too Human picking up 3 achievements, Gears of War picking up 4 achievements, and afterwards, there were some awkward stares and silence... you know how it is.

I swear, I planned on playing Too Human for like an hour, it ended up stretching to 3 hours. I can't say I really enjoyed it either. I found I enjoyed the item looting and constantly re-equipping my character.

The one thing they really did right was the equipment...I really love games that change the appearance of your character...especially when the character models are as ugly as this games. 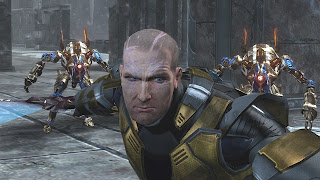 What really baffles me about the sheer horror that is the Too Human character models is remembering good looking PS2 games like Final Fantasy XII. The character models are obviously inferior from a polygon/realism standpoint...sort off. But smart designers use the technology and don't let it use them. The in-game cut-scene models in FFXII are animated, were lip-synched and looked amazing. Too Human tries the Uncanny Valley approach and fails miserably, the models are atrocious in close-ups and it happens all the time in the game. 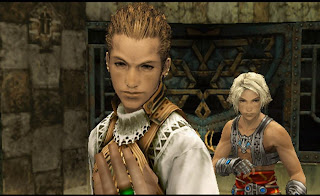