Skip to main content
on February 04, 2009
One of my favorite games of 2008 is making a return to the PS3 this year. Uncharted: Drakes Fortune was perhaps the best time I have had in gaming for a long, long time. The gameplay, story, action, score and presentation were so good there were many times I forgot I was really playing a game. It was so good in fact that I used it's patched in trophies to replay the game a total of three times.

Many, many, MANY games these days have such great ideas that often bog down in frustrating 'throw your controller' moments. Gears of war is the perfect example of this, when you amp up the difficulty it is no longer challenging, it is simply cheating on the AI's part. I can't count the amount of times I swore after dying in a way that should not have happened.

In Uncharted if I died it was because I was impatient, not careful or tried something in a way that I knew I may die or lose the path. So of course I am extremely excited at the thought of continuing Drakes adventures. I recently read an amazing interview with Evan Wells on Joystiq (Naughty Dog head). Which revealed some great new features/details, I am excited about all of the reveals, but one had me more excited then others.

-No Install (of course)
-Longer experience
-Unlockables again (yay!)
-Diverse environments, cities, jungles, Himalayan mountains and more
-Moving objects (trains, convoys, cars) that you can also freely move on...think some of the best Indiana Jones chase sequences...
-And best of all the sidekick character, Chloe, is voiced (and inspired by) Claudia Black!! She is one of my biggest fantasy crushes and if anyone has watched Farscape you would know why...

Seriously, Nolan North as Drake and Claudia Black as Chloe, this will be a helluva ride (Claudia will be doing the motion cap as well, so I am really keen on the making of features like the ones in the first game).

This will be my second most anticipated game of 2009 (Dragon Age Origins being #1) and I will gobble up all info as it comes. 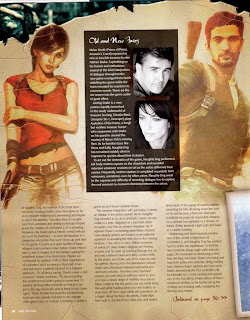