Skip to main content
on August 17, 2009
Holy crap, stupid games dropping at the same time. Dissidia: Final Fantasy is releasing on the same day as Batman: Arkham Asylum. Damn, this is a game I have been looking forward to for some time. In a nutshell:

-It features a hero and villain from the first 10 Final Fantasy games.
-It is an RPG meets fighting game, but the fighting is dynamic and strategic, not button combination based.
-Tons of collectibles, two story modes that can be played multiple times with the various characters.
-Amazing graphics, sound and interactivity.

Plus you get to play as the Final Fantasy character who has a sword tail! 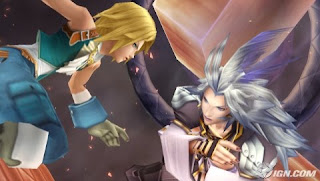