Skip to main content
on August 20, 2009
Okay, I am ready to eat crow. Back at E3 a game was announced and when I did my E3 post mortem for Microsoft I made these comments about this Xbox 360 exclusive game.

'Shadow Complex – Nothing about this looks terribly interesting to me, I know I will be in the minority, but I could not feel any excitement about this announcement.'

Sigh, I am a weak, weak man (see Riddick post) and the hype post release for this game has been great. So I bought it last night and boy is it good. They were right, it is a 3d, modern day take on the Metroid formula. The maps, guns, tunnels, climbing, everything feels comfortable and solid. Add to this the absolutely STUNNING graphics and the game is rocking.

The main character is so generic though, a review called him Nathan Bourne (although his name is Jason) because he looks and acts like Jason Bourne but is voiced by Nolan North (of Uncharted's Nathan Drake fame). If you were on the fence, don't be, with collectibles, powerups, amazing action, hidden paths, smart backtracking (they give shortcuts) this game is a winner. 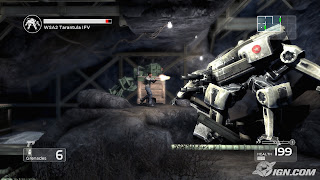