Skip to main content
on October 22, 2009
So Borderlands is a game I have been looking at for some time. It is labeled as a Role Playing Shooter (RPS) and it is just that. It has a really well done FPS engine (no surprise as the developer is Gearbox) but the game using that engine is your classic North American RPG structure.

-Odd characters who assign missions
-Overarching story with smaller sub-quests
-lots of varied monsters
-customizable skill tree and level progression as well as a deep equipment system.
-Lots of dialogue, missions and rewards that are satisfying.

The game is really, really violent (geysers of blood), has a mad-max vibe with some dark and twisted humour, and the cell shaded graphics add a great feel to the game as a whole.

People will compare this to Fallout 3, Fallout 3 however was a more realistic take on a post-nuclear world with less humour. It is also an incredibly deep RPG wrapped around a basic FPS engine. Borderlands is a more casual RPG experienced wrapped around a stellar FPS engine...both are great, Borderlands has a little edge in the fact that it has 4 player co-op using your canned character, carrying over your benefits and rewards between single and multi-player games.

Very recommended, and tons of fun! 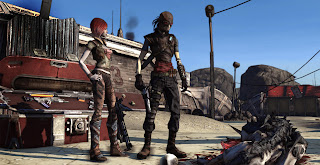 Rambunctious Imp said…
What song is that?
12:04 PM