Skip to main content
on July 19, 2010
So I just completed my first Bluesfest experience. I have to say it was an amazing and tiring experience.

There were a few bands like Metric, Matt Good, Weezer and Great Big Sea that I was greatly anticipating but thanks to my lovely girlfriend I experienced a number of great bands I had never given a chance to before. I will start with the ones I anticipated and move on to the new bands I plan to absorb as soon as possible.

Metric
What can I say, I have such a fanboy crush on Emily Haines and she did not disappoint in their set. She was full of manic energy, the band was spot on and the show was absolutely amazing! Emily if you read this I will drop anything if you call...just saying! 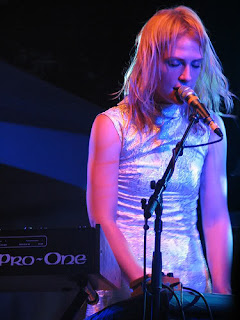 Matthew Good
Matthew Good will always hold a special place in my memory as we watched the show with a friend from Montreal and had a great night of drinking and fun afterwards. The show was amazing and a precursor to one of the best nights I have had. Oh and Matt put on a great show as well.

Great Big Sea
This was the biggest party show of the festival, the place was busier then any other day we were there and we danced non-stop together till the very end despite being on very little sleep from the previous nights fun. They are a great band that still has the magic I remember from my college days.

Weezer
One of the best shows I have ever seen. The music, antics, vocals and vibe were amazing, a truly great end to a great festival. The only shame was they ended with 14 minutes to spare before sound bylaws kick in, that is 2-3 more songs we could have had! Best moment was when Rivers came out in a blond wig and mashed up Poker Face into their set.

Bands I experienced for the first time!

Arcade Fire
They were in the middle of the festival, but I need to mention them first. The entire time we watched them the feeling in the air was magical. Both of us just stared at each other at times, absorbed the music and just had an amazing night. The Arcade Fire is a large band with 2 violins, 2 drummers, 2 keyboards, multiple guitars and singers. How they make it work and work so well is a wonder. One of the top concert moments of my life. 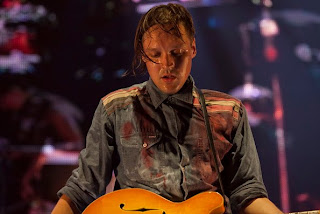 Moneen
A Punk band on a smaller stage, but wow did they get my body moving. Hard music with surprisingly strong vocals combined for a great experience.

Bluestone
The girl has friends in the band and they were the first act we saw this year. A good band with lots of energy and a good sound. The female vocalist has a great voice live.

The Flaming Lips
I had heard of this band but never really experienced them. The show was absolutely phenomenal with the band putting on a wacky show complete with lead singer in a bubble crowd surfing. Go go dancers, dozens of balls to kick around and at least 50 confetti guns. The music was great and the band genuinely seemed to enjoy themselves.

City and Color
We went to a rainy Bluesfest event on York street to see Dallas Green in his band City and Color, he also sings (very differently) in Alexis on Fire that we saw as well. Dallas has one of the most amazing voices I have ever heard, I can't believe I have never experienced his work before. I am desperately tracking down his albums and may be forced to resort to iTunes, I liked it that much! 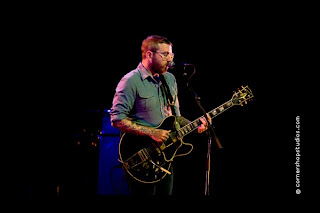 Other Bands
There wasn't a bad experience, but the rest were OK and not amazing. The B-52s were a little rough but fun. The Moody Blues were technically fine, but fairly boring. Aexisonfire was good, but a little too guttural for my tastes. Very odd seeing Dallas Green play punk style after his acoustic set the night before.

Bluesfest was a great experience, made all the better by having my girlfriend as my festival companion. It is truly something to experience great music, atmosphere and plenty of beers from the Mill St. brewery with a person who gets and appreciates music. Can't wait for next year already!