Skip to main content
on August 17, 2010
So I will continue the story of my trip to Halifax next, but I recently did something so amazing that I need to talk about it. Some friends and I went and experienced a bit of the high flying circus life and did some Flying Trapeze lessons.

There is a company in Montreal called Trapezium that will teach you to fly through the air with the greatest of ease. Well they make it look easy, but it was very hard. The stage was set with a safety net, a platform 25 feet up and a small ladder. Equipped with safety gear I was the first to go up and try this out. 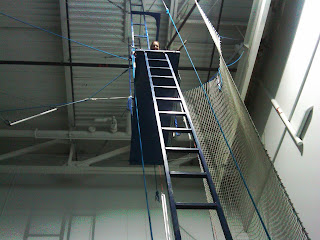 The weirdest part was gripping the bar, you had to dangle over the edge as a spotter holds you by the belt. You grip the bar and drop once the say "Ready, Hep'. We started basic with a swing, then hook the legs, then swing with no hands, grip and unhook legs, then drop. It was incredibly exhilarating and fun, but they always added a step. 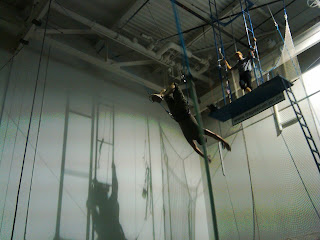 After this they introduced a backflip to dismount. Basically you did the same steps as before but instead of dropping in a sit you flip. After you drop your legs back down you kick three times and on the last kick forward you let go and flip to your landing.

Feeling good we were now ready to be caught and rely on another person instead of our bar. Timing in this one is critical as he has to meet you. You do all the same steps, be as you are hanging by your legs you arch back and when he grabs your arms you grip and release your legs. It was the coolest thing ever and I flubbed my first attempt but the next couple went great.

The last trick was to be caught, then as you swing back pus down on your arms, the catcher then uses the reverse gravity to through you up, you twist and grab the bar. In theory at least. I tried it twice, the first time is this epic fail (tho my transition to him was great), the second I was slow and couldn't hook my legs properly and aborted.

Trapeze was one of the most exhilarating, fulfilling and amazing experiences of my life. It is the day after and I am still smiling and amazed I did it, even though I am covered in bruises. It was exhausting and punishing but I would do it again tonight if I could.