Skip to main content
on September 10, 2010
Great Googely Moogely, Kingdom Hearts: Birth by Sleep is out and apparently all kinds of awesome. I am a huge fan of the series, especially the mainstream PS2 games, even though I have still not completed the game to get the proper ending. I have been trying for a LONG TIME.

The Portable games have always been a divergence from the series. Chain of Memories had a battle system based on cards, so no real action sequences you directly controlled. It was fun. I finished it, but it was an anecdote and not the game proper. 358/2 Days was so mind numbingly repetitive and bland that I could not care much about it. The tutorial reached FFXIII levels and lasted way too long before giving you your full abilities.

Birth by Sleep aims to change these perceptions. Featuring three new characters unburdened by Sora, Roxas and Co's backstory they can simply be Keyblade masters and interact in the world while affecting the overall story. It sounds great and looks even better: 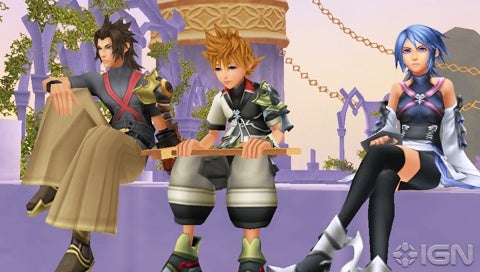 The gameplay is no longer a gimped version of Kingdom Hearts, it is a full fledged action RPG with improvements apparently. When Square Enix gives games this treatment we have real gems like Crisis Core, Dissidia and now Kingdom Hearts: Birth by Sleep. Cannot wait to pick this up and dive back into this unique blend of Disney infused Squeenix RPG goodness.