Skip to main content
on September 08, 2010
I am going to take a cat lady moment and talk about the latest member of my family, an amazing and absolutely crazy bundle of fur called Indy.

I started thinking about a cat almost as soon as I moved on my own. I love cats and couldn't have one in the past so once the opportunity was there I seriously thought about it. I had trolled a number of the humane society sites but one day the girl sent me a link to a really cute female tabby located at a Pet Smart via the humane society. I went the next day to check her out but she was already adopted but her brother was still there. They mentioned he was actually a lot more affectionate and the moment I touched him he purred up a storm and curled into my hand. 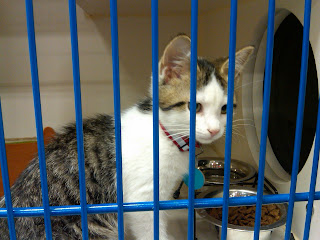 The kids fell for him as quickly as I did and on June 12th of this year Indy became part of the family. I bought him and all the supplies and took him home and he immediately settled in, no issues feeding, no issues with his litter box. He is insanely friendly and almost from the start he cuddles with you and purrs louder then my Xbox 360. The girl fell for him as soon as she saw him and despite minor allergies spends many a night petting and cuddling the bundle of fur.

I mentioned he is crazy right? Well we discovered that on top of his insane cuteness and affectionate nature he has no limits on what he feels he can do. Climb on the table, your shoulder while you eat, repeatedly sniff at your food despite moving him off the couch. Hell he even has the gall to drink my beer! 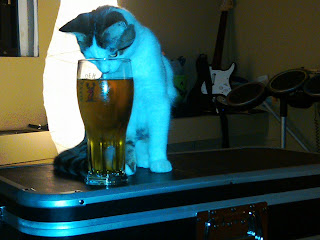 He is also a very aggressive player and has many a cat fit running pell mell across the place, he has even vaulted across the girls book and my laptop using them as steps when zipping around. He frequently erupts into scratching and nipping fits, funnily enough not with the kids, but with the girl and I and sometimes he takes it too far. He recently lost two teeth and we think it is associated with that, but boy can he leave marks.

He also can fetch and loves to play that game. There are a couple of stuffed animals he loves, a little cat and rabbit we got him being the favorites. If you through it he will tackle the animal, fight it for a while then pick it up in his teeth and drop it on your lap. He loves this game and also loves to chase crumpled papers for long periods at a time. 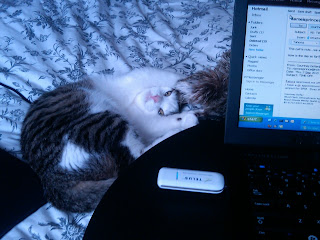 At night when he sleeps in the bedroom he will play around for 5-10 minutes then settle next to me (always next to me) and curl up to sleep making body contact. He will generally wake up when the sun rises and want to play, but for the night even if I shift he relocates next to me and this amazing furry weight is next to me all night. When I am at leisure on the laptop or playing games by myself he will always curl in my lap (if he can) and purr away or fall asleep with me.

I lucked out with this cat, he has a great and quirky personality (he suspends himself on my screen and has climbed a fake rubber tree a number of times) but he is very affectionate. He has some loyalty and playful features of a dog, but all the independence and self reliance of a cat. He is amazing and a great companion around the house, the boys adore him and so do the girl and I.