Skip to main content
on January 04, 2011
Long time no Blog. It has been a busy month or so but I am back in the swing and plan to blog some. The big change in my gaming world has been my purchase of an iPhone 4 and realized that gaming on this platform is a really big deal.

The iPhone is a wonderful gaming platform for many types of games in particular for the small form factor and play anywhere ability. The display is amazing and touch controls are more response then you could ever have imagined a few years ago. 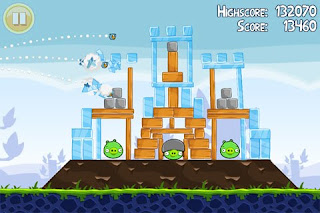 The other major plus to the iPhone as a gaming platform is the pricing model and availability of purchasing games. The AppStore (while cludgy at times) is available on the phone and games can be purchased anytime, anywhere although larger ones need a wireless connection to download. The pricing model is unbelievable. Many quality games are only 99 cents or slightly more. There is literally hundreds of fun as hell games like Angry Birds, Cut the Rope, Rage, Star Defense and more at less than a buck.

This pricing model cannot be understated, we have been buying games for 40 or 60 dollars and smaller PC games for 10-15 and were satisfied with that. Now we can buy a Rage HD for $1.99 or Angry Birds for 99 cents and play for hours. Frequently there are special offers to raise visibility and games are free for a short time. Recently I grabbed the AMAZING Broken Sword: Directors Cut and Diner Dash for free. These are both great games and to get them at the grand price of nothing is unheard of and keeps me coming back. I follow the APPera on twitter and any free games are tweeted by them and it is well appreciated. 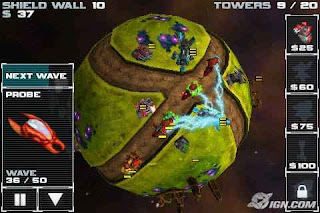 The true joy I have in the iPhone is finding games that grab me and don’t let go. The first was Star Defense, a neat take on tower defense games featuring a full planet that you can rotate or zoom around. I played this whenever I was waiting or had a few moments. That is until I found Game Dev Story.

This simple game lets you create your own game studio, hire designers, writers and coders and then design games. You choose and license new platforms, unlock game types to design, train and level up your staff, tweak game stats, name them, release sequels, create your own console, attend awards shows and trade shows. The depth of this game is delightful and incredibly addicting. 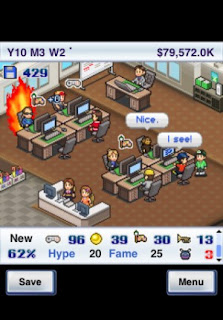 The graphics are simple but charming, the music is 8bit, the characters are charming and the gameplay is simple but has a way of grabbing you until your eyes are sore and your fingers are nearly bleeding from tapping so much. Essentially you choose a game genre and type, the platform you want to design on (all based on real consoles but with names like game kid and neongeon) and click go. You then choose a scenario writer who adds bonuses to fun and creativity. Then the team starts to program, sometimes they create stats in fun, creativity, graphics and sound. Then at the 40% mark you focus on graphics and a designer adds bonuses to graphics. Next is the sound as a priority and a sound engineer is assigned to give bonuses in that stat. Finally when the game is done you debug it, during the whole process you can advertise in various ways, use modifiers to increase stats and train/level your staff.

Once the game is released you can move on to the next one right away. Critics review the game and if it is Hall of Fame material (32 points or higher) you can make a sequel for it (but wait till its sales cycle finishes). You see the sales stats as they happen and can see if it debuts on the top ten or not. As the money climbs you can license new consoles as they launch, make bigger games (game genres and types level up and cost more to develop, but make more). The ‘must keep playing’ factor is unreal. 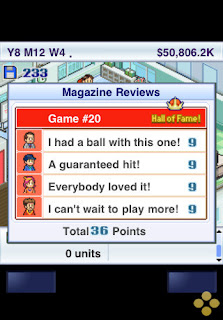 I made games of all types, a Music game with a Movie type called Theme Writer, a Simulation game with a Romance type called Girl Crush, a War Shooter called Art of War and an RPG with monsters called PokeCreatures are some of the games I made. My first campaign I ended with 58 games over 22 years and I am up to 16 games in 7 years on my new campaign.

The game is so much fun and the Girl and I are playing it to death (she has developed a console and I haven’t and she won more awards but I have had bigger selling games!) but it is not perfect. I would love to see a sequel with more customization of your office upgrades (plus more of them), create a character, game center support, more control over advertising, more control over the game conferences and the ability to play longer or expand to multiple studios.

Having said that I am still playing the game and have clocked more time on this 4 dollar game then I have on the 60 dollar COD: Black Ops I got in November. That is an unbelievable statement! The iPhone is a revolution in gaming and I cannot wait to see what 2011 holds for it.