Skip to main content
on August 12, 2011
Mass Effect is one of the best game series out there with Mass Effect 2 being one of the best games I have ever played (3 times). The game boasts stellar visuals, amazing gameplay, engaging characters and a main protagonist that is very nearly perfect. Especially because you can make that character your own by customizing the look with a robust creation editor within the games.

The main character is named Commander Shepard and in all of my playthroughs I create a female Shepard or FemShep as the internet has called it lately. In my mind (as a man who likes looking at attractive women) I wanted to look at a female for my 30-40 hour experiences with the character. She is a phenomenal character because she is battle hardened, reacts in amazing ways to adversity and the voice acting by Jennifer Hale is spot on. My Commander Shepard kept her scars from the rebuild process in Mass Effect 2, had a fairly angular face and shoulder length dark red hair. She also wore understated lipstick and some eye makeup. My thought was that, yes she is a tough as nails commander, fights giant aliens with her bare fists (seriously), but she is also a passionate person. She pursues relationships because she has no fear of death, embraces life and wants to look and feel attractive when she can because she chooses to. 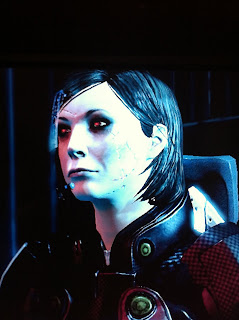 Take me for example, I am a male who takes care of himself. I try to stay in shape, wear nice clothes have well groomed hair and goatee, that is me. I will take the time to make sure I look OK before I leave for work, who is to say Commander Shepard doesn’t as well? Many people seem to have a different opinion based on the backlash after Bioware decided to have a vote for the ‘official’ look of the female Commander Shepard. See for Mass Effect 3 Bioware has decided that the Female Shepard will finally be officially promoted in commercials and on the collector’s edition box. And like any business minded company they wanted media attention so they had a vote for the look of Female Shepard. Frankly I wasn’t Keen on any of them (because they don’t look like mine!), but if I had to choose it would be these two: 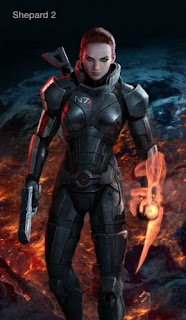 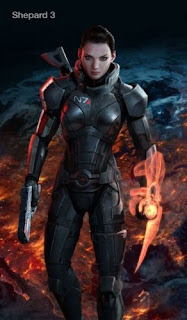 Instead the unwashed Masses (harhar), chose FemShep 5 who is blonde, pretty and hated by many in the gaming world: 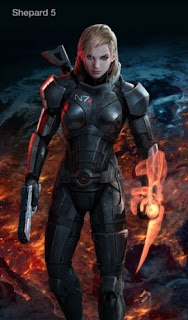 While I would not have chosen this model as it is not my visual ideal for Commander Shepard (where are her scars dammit!) I certainly don’t despise it for some of the reasons the internet does. ‘She looks more like someone who would do her nails instead of saving the galaxy’ ‘Being blonde there is no way she could command a team’ ‘it looks like a wind can blow her over, she looks stupid’ and many other similar thoughts echo around this decision.

Hey Internet! Just because a woman is blonde doesn’t make her stupid, Just because a woman is attractive do not assume she is not capable, and for God’s sakes assuming a female Shepard is dumb because women couldn’t save the galaxy just makes you a waste of air. The character of Commander Shepard will not change because she is represented by a pretty blonde, her voice and actions will remain the same and she will kick ass just like Ellen Ripley did many times, in fact I would place my Commander Shepard above any female heroine out there any day...case in point see the fist fight at 5:20 and later in this video:

It is pretty fantastic that Bioware is going to feature an official Female Shepard in the media for Mass Effect 3. They tried to do it in a way that the public chooses the face of the FemShep and the Internet chose FemShep 5. Maybe it was non Mass Effect fans, maybe it was and they wanted a blonde, either way I think it is great that there will be a female line of ads. And to all the outraged kids out there who are furious that their beloved franchise will be tainted by this ‘blonde bimbo’ Shepard I have to ask why you are angry? It must be the ingrained superiority complex that the anonymity of the Internet gives to certain people because at the end of the day I am sure you will do one of three things:

1 – Import your Commander Shepard from the past two games (I will)
2 – Create your own Commander Shepard variant
3 – Use the male version of Shepard (as apparently 87% of players did) and it is a moot point cause you like generic looking male soldier characters.

So stop whining, get over it and when the kick ass ads with a possibly blond but still very determined, deadly and dangerous FemShep appear be prepared to eat your complaints.

Jericho said…
Reading again, I actually don't agree completely, for good or ill on the design we need one official Shepard. The goal is to have a consistent look and feel in the marketing and if there are five different looks and feels for the character in the marketing you lose that impact. While I don't like the blonde I want all the trailers and commercials to have the one consistent look. I mean as much as I hate the generic buzzcut square jaw male Shepard I recognize and identify him as Commander Shepard because he was consistent from the start.
5:39 PM