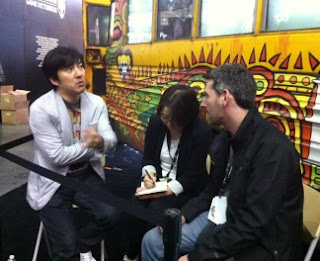 PAX East was full of games that were mainstream, indy, or just plain crazy. Lollipop Chainsaw is a game that doesn't innovate or break new ground, but it is a fun, crazy, and over the top sexy game that is worth checking out once it releases in June for Xbox 360, PS3, and PC.

The setting should have prepared me for the game, in the Warner Bros. booth there was a short school bus that had been decorated and built just to demo the game. There was also a very authentic model named Jessica Nigri cosplaying as Juliet Starling who caused some waves (and controversy) in her revealing outfits. The fact that the enigmatic and brilliant Goichi Suda, better known as Suda 5,1 was there made the experience that much weirder and more wonderful.

Lollipop Chainsaw is the newest endeavour from Suda 51's Grasshopper Manufacture and it is one he is very passionate about. The game revolves around Juliet Starling, who has many of the traits of a stereotypical blonde cheerleader but is also from a long line of zombie hunters. When a major zombie outbreak occurs and her boyfriend is attacked, she casts a spell to keep his head alive and sets out with her magical chainsaw and pom-poms to destroy the zombies and set things right. 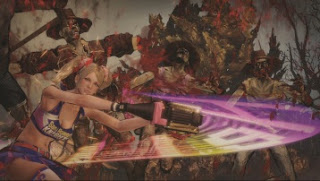 I asked Suda 51 why he switched to a female lead after having such masculine leads for No More Heroes and Shadows of the Damned and he was very passionate about his reasons:

"We had a thought to have a normal girl as the hero and as we started designing her all the components came together in perfect ways. She is strong, sexy, and has such a great personality that comes through on the screen"

Suda also mentioned that as the character of Juliet started coalescing everybody at Grasshopper and Warner Bros. fell in love with her and could envision her as the next Lara Croft. She is certainly an attractive character and effective on screen. She is armed with a chainsaw that can be used in light and strong attacks, as well her pom-pom attacks can stun enemies making them easier to kill.

The weapons and attacks are used effectively throughout the game. At certain points you need to use your chainsaw to cut barricades and there are fun mini-games to perform that action in a visceral way. During combat if you stun enemies and kill three or more at once you get a glitter attack that generates bonuses and a really cool effect and animation sequences. The combat is quick, brutal, and frankly a lot of fun. 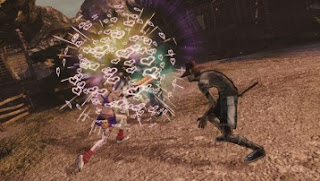 As this is a Grasshopper Manufacture game there is of course some crazy off the wall gameplay mechanics and your severed head boyfriend is at the heart of many of them. At key moments you can place his head on various zombie bodies (once you decapitate them of course) and a rhythm mini-game is triggered. With Juliet cheering, you progress through a QTE (Quick Time Event) to make him dance until he reaches the end goal, which may be a point he has to chuck Juliet over or a barricade that needs destroying. The sequences are so crazy and funny that I actually got over my normal hatred of QTE's and enjoyed playing it. Seeing zombies dance never gets old.

I asked Suda about the severed head and if there were any things that were simply too crazy to add to the game:

"We originally had some really crazy things you could do with your boyfriend's head, most are in the game but one was not allowed. We had Juliet setting up zombies like bowling pins and you putting your hand into the head and throwing it like a bowling ball making them explode. It was a little over the top and we took it out. But there are many more crazy things you can do with the head that you will be surprised and happy to see." 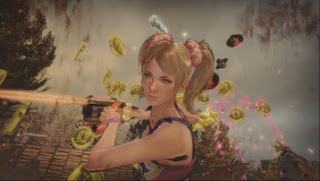 Lollipop Chainsaw also features coin drops that you can use to earn weapons, outfits, and moves within the game. This makes the experience of killing zombies in creative ways that much better as there are rewards to deepen the experience.

The main character itself is a very sexualized character playing to all the stereotypes of the typical American Cheerleader and I asked Suda how she came about and if Buffy the Vampire Slayer was an inspiration:

"She [Buffy] was definitely someone that we thought of as the character developed, but the idea of Juliet has been with me for a while and I was excited to design her. She is a typical high school cheerleader but she also has all these cool powers and weapons and kicks butt. We are really hopeful for this character and the game and excited for it to come out. The team is working very hard and I am proud of our work."
Playing the game myself I have to say that I am looking forward to it as well. The action is fast and furious and the characters and scenarios are so over the top that I couldn't help but grin as I tore my way through waves of zombies. Suda 51 told me that he thinks this will be their biggest game yet, looking at the inherent mass appeal and quality of the game itself I am inclined to agree!