I had the opportunity to check out a Beta reveal presentation about Pathfinder: Wrath of the Righteous and I remember thinking how ambitious this game seemed as the developer outlined all it had to offer.  Once I had a chance to play the Beta I could see how developer Owlcat is brilliantly implementing a multitude of feature sets into an engaging, if rough around the edges game.

This game is the sequel to Pathfinder: Kingmaker which was a popular title but had a lot of fan feedback for improvement requests.  Owlcat took this to heart and strived to not only stream line the games mechanics, but add a host of features. 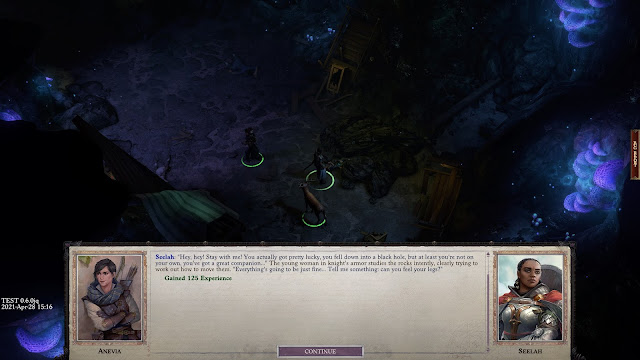 This is the second beta, which spans the title’s first four chapters, includes new content such as Crusade gameplay, new side quests, an intelligent weapon companion, a weather system and more. It also includes all of the features from the first Beta which highlighted the core mechanics, progression and Mythic path systems.

Outside of presentations this was actually my first time playing Pathfinder Wrath of the Righteous and I have to say I am impressed by many aspects, in particular the visual and technical polish applied to the game.  From the start the level of detail in the look and feel of the game and the mechanics from Pathfinder got me incredibly interested. The game starts as many RPGs of this type do (think Divinity Original Sin or Pillars of Eternity series) with character creation for the main protagonist.  With 25 classes, 12 character races and a host of spells, skills and feats to choose from the depth to your character will be immense.  My only wish is that they had more visual customization options, but what is there works great.

Dialogue and skill options are prevalent adding plenty of non-combat variety with actions and conversations changing depending on choices or successful skill checks. Once combat is started though the true depth of the game is unleashed. 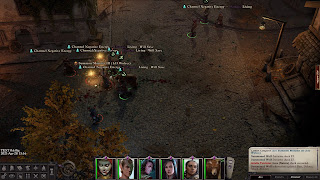 The game can be paused at any time during real-time combat or turn based combat can be selected any time battle by battle. In real-time the main protagonist and companions attack with their favored options.  A quick pause can allow spells or actions to be chosen but so far the AI has been pretty good for deciding who to attack.

In turn based mode each character is given their chance to be directed and actions flow based on initiative scores.  This is a great option for tougher battles but I found real-time with pausing has been a great moment to moment option in standard battles.

There is also sections of the game where the player as a Crusade commander leads armies to fight against demonic armies through strategic army management and tactical turn-based combat (inspired by Heroes of Might and Magic games). It adds a large scale twist to the game which cements the feel of being part of a larger conflict.

As I played through a large amount of the Beta I enjoyed all the main mechanics but a lot of the little things Owlcat implemented has impressed me as well.  Idle animations that are unique to each character, shared inventory space across all characters, easy spellcasting and truly deep levelling are all highlights of the game. 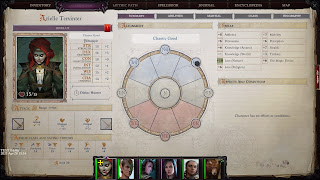 But of all the little touches the Morality and Mythic path is what I am most looking forward to exploring more.  Early on in the game choices to veer towards Angelic or Demonic influences start creeping up as well as dialogue choices based on alignment.

These choices to reply in a Good, Evil, Chaotic or Lawful manner really made me feel like I was forming a character personality in a way that few games have managed.  The choices towards the Mythic Paths to obtain extraordinary abilities and shape everything that comes next. Your decisions might transform you into a celestial Angel, a ravaging Demon, a powerful Lich, a cunning Trickster, a lawful Aeon, a rebellious Azata, a wise Gold Dragon, or an ever-ravenous Swarm That Walks. 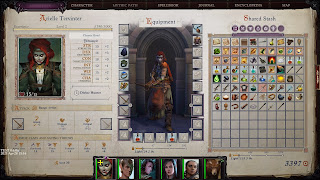 After finding an artifact I was able to choose to use Angelic Mythic powers to turn the tides in key battles and scenarios.  It was a really neat twist to the standard genre and between Mythic Paths, a huge amount of character classes (multi-classing is available) and the alignment based dialogues the choices feel weighty and important.

Visually Pathfinder looks excellent and I am surprised (pleasantly) every time I realize this is a Unity based game.  The developer has implemented great art, lighting and background magic making this a really lovely game to experience in motion.

While I am enjoying the game greatly and look forward to the finished product it is a Beta and there are some rough spots.  There is still obviously some placeholders in the skills/feat system and I had a few bugs occur. Some were humorous, like my Elk companion (called Elkminster of course) walking backwards everywhere, to a huge nasty one that caused the game to crash every time I tried to level up. 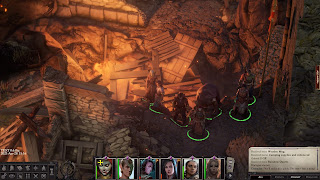 Thankfully the dev team implemented a robust and painless bug reporting tool integrated into the game in a seamless way.  They are incredibly engaged at Owlcat and I can tell from the few interactions that this team loves the game and the Pathfinder ecosystem.

The way they are deploying the Pathfinder rules is elegant and despite the complexity of the ruleset easy to get into thanks to popups, tooltips and in-game hyperlinks to more details in game.  Owlcat mentioned on our call that they really strived to streamline the game and its systems and it shows. I am new to both Pathfinder and this CRPG series and was able to dive right in.

In the end I am incredibly impressed with what I am seeing so far in Pathfinder: Wrath of the Righteous and eagerly look forward to the final product.  It is a deep, nuanced and beautifully executed RPG that is well worth checking out when it releases later this year.