She slowly wakes up, seemingly thrown from her crashed ship, the Helios she remembers as the fog slowly lifts from her memories.  Good I have my sidearm this time.

The memories are scattered and disjointed but she remembers doing this over and over again.

It does not matter, steeling herself she dutifully reports in even though she knows no one is listening ‘Astra, I am continuing to pursue the White Shadow broadcast, Selene out’ 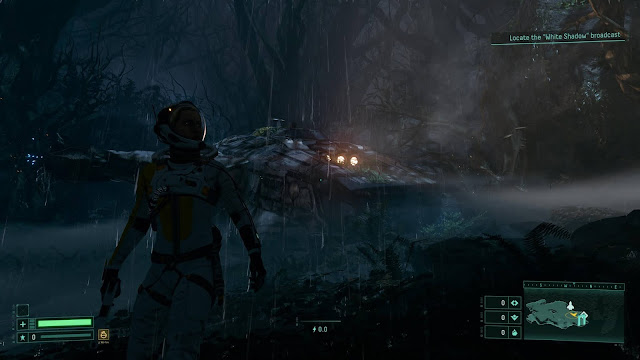 Her body remembers years of conditioning and training instinctively, her suit augmenting her muscles and sinews as she bolts forward with determination and purpose.

What seems like years later, but it has been less than an hour she finds herself before a deep pit.  Parasites and strange alien artifacts cover her. They are enhancing and inhibiting her all at once.  She feels raw power and deep sickness all at once.

She hoists the alien rifle she has found, it hums with a power that is foreign and familiar.  She shrugs off her memories, the sight of her family home sitting in the middle of this strange changing world and the Astronaut that she sees from the corner of her eyes.

Dropping into the pit she faces it again, how many times has this happened.  Will this time be different? She harnesses all her skill, all her newfound powers bestowed by this deadly and beautiful place and finally sees the creatures drop in defeat.

She relaxes for an instant ‘Finally got you’ she pants as the creature fizzles and shrinks in on itself.  Then with a ferocious roar the creature rears up and everything goes black.

She wakes with a yell, collapsed this time in the command chair of the Helios.  It is still damaged, she still has no other choice but to try again.  This time she will succeed.

‘Astra, I am continuing to pursue the White Shadow broadcast, Selene out’ There are games that instantly grab you by the raw cerebral cortex and compel you to keep playing for one more hour, or one more run.  In the world of the rogue-lite genre games like Dead Cells, Hades and now Returnal are prime examples of this intense visceral pull to just keep playing.

Unlike those titles, which are fantastic but are cartoony or pixel graphical representations of their worlds Returnal is a stunning fully realized and realistic 3d world.  The environments, creatures, effects, and title character Selene are stunning to watch in motion.

Thanks to this being a full on PS5 exclusive (no last gen options for this game) Returnal also has the prime attribute a game like this requires, it is lightning fast.  Selene moves at a fast pace with instant reactions to button presses.  Load times are non-existent between rooms and even upon death (which will happen a lot, the game restarts with barely a pause. 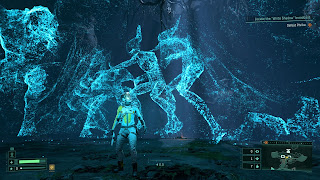 This is key as the game relies on the player not being inconvenienced if a run is cut short.  The whole point of Returnal is to channel the spirit of the movie the Edge of Tomorrow and Live, Die, Repeat.  The whole time learning the creatures, skill sets, and weapons while slowly building an arsenal of permanent bonuses.

There are many artifacts, items and parasites found during each run that adds a risk/reward system to the game which is captivating and enjoyable.  Many items add a benefit, but also include a detriment that can only be cleared by completing a challenge.

This aspect of taunting the character with bonuses carrying a compromise is a brilliant structural tool.  The fact that this are general represented by symbiotic parasites also feeds into the amazing look and feel of the game. 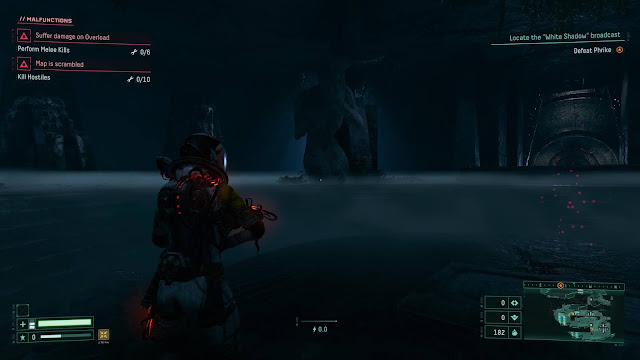 Part of the magic of Returnal is the atmosphere developer Housemarque has imbued into every aspect of the game.  The desolate world has remnants of Xeno artifacts and bodies as well as strange creatures and devastating traps. Section by section the world just feels more real and alive even though much of it is dead and decaying. 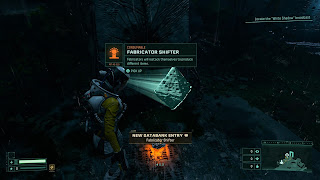 Section by section, room by room the game feels more nuanced and deep. The story elements are distributed via narration and audio logs Selene finds from her past selves as well as ancient tablets with Xeno script that needs to get deciphered.

The one aspect I wish could be more prevalent is that dialogue and introspective musing.  When it happens it is riveting, creepy and magical.  But as this is a rogue-lite once certain sequences are experienced they tend to be muted until the next phase of the game is unlocked via exploration or defeating a boss type creature.

Regardless even the small moments of exploring a cavern filled with dead Xeno creatures or a crumbling set of structures is magical.  It is the type of game that you can’t stop thinking about even when you are not playing. 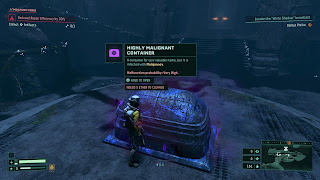 Like the aforementioned Hades and Dead Cells, Returnal is a masterpiece of game design as well as a visual tour de force.  It also feels like a Housemarque game as far as the action goes which is truly amazing as it looks nothing like anything they have done before.

The developer has also harnessed many of the key aspects of the PlayStation 5 to enhance this already great game.  From leveraging the SSD for load time free gameplay and excellent use of haptic feedback on the Dual Sense to amazing 3D directional audio on the Pulse 3D Headset the technology is leveraged brilliantly.

Returnal is a fantastic experience and the best exclusive currently available on the PS5.  This game cannot be recommended enough and is one that will be played over and over again during this generation’s life cycle.  Live, Die, Repeat and enjoy.