Skip to main content
on March 23, 2009
Received a shipment from Amazon today, took forever to get the game in stock, but it is finally here. 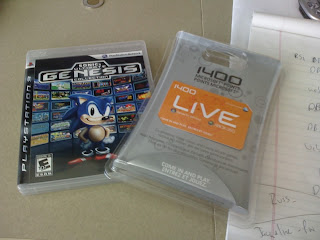 The Microsoft points card was on sale and is for the upcoming Pearl Jam DLC for Rock Band. Cannot WAIT to play and sing those songs.

The game is something I have been looking at for a while...just look at the bullet points:

There are 40 titles planned to be included in the collection from the outset with more unlockable content in addition to that, including more games and interviews with creators. Some of the games included include the Sonic the Hedgehog series, four Phantasy Star titles (!), the Vectorman series, Space Harrier, Columns, and even Kid Chameleon. All the games in the collection have been "converted" to high definition and will be output in 720p.

The list is massive and there are some really great games like Sonic Spinball, Streets of Rage, Shining Force, Ristar, Golden Axe and many more, there are also unlockables like Alien Syndrome (loved that game), Zaxxon and Altered beast.

Some of the titles Like Echo and even the Phantasy Stars will not be launched as they will be toolong in the tooth or obscure for me...I mean could I picture replaying Phantasy Star III for 30+ hours when I haven't even finished Final Fantasy XII yet? But tons of the other games will be played to completion...very excited.