Skip to main content
on March 09, 2009
Who Watches the Watchmen? I do! Ha bet no one has used that joke on a blog before! err...OK moving on.

Saw The Watchmen on Friday and since it was so long and I went to a late show I am just recovering this morning. I have to say I really liked the movie. It was a nearly perfect translation of the Graphic Novel yet improved on a lot of the things I didn't like from the book.

Loved:
Disliked
I am trying to think of other things not to like, but by and large I have to say this was a near perfect movie from the graphic novel. I have to laugh as I read comments and generally most males moan about Dr. Manhattans penis. I guess they never read the book, but I had no issue with it as if fit with the character and his lack of concern with the human condition. The violence was also very graphic (and the sex scenes), but again I have no issues with it as it fits the medium.

By far the best part of the film is the perfectly cast Rorschach, every scene he was in was amazing and he WAS the character. Zach Snyder should be proud of this film, I am sure Alan Moore and Dave Gibbons are as well. 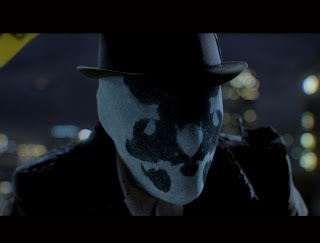 X said…
I actually liked the music -- I thought the fact that it had an 80s soundtrack was awesome.
11:36 AM

Jericho said…
I just found that the music was too overpowering and never fit the scene. It was almost like (to me) that they were trying to make a good soundtrack then music that fit.
12:16 PM

X said…
I don't know... '99 Luftballoons' is about nuclear war, and when 'Everybody Wants to Rule the World' was playing quietly behind Veidt I thought that was clever. And I always love some Leonard Cohen. ;)
5:44 PM

99 Luftballoons was too bippy for the moment as well....just my opinion...but every song pulled me out of the moment.
8:18 PM