Skip to main content
on May 02, 2009
This isn't my normal weakness thing...I swear! I have birthday gift certificates to spend and I love a good superhero game. Plus I have been looking at Eternal Sonata for near a year and wanted to pick it up. The game was finally down to a great price used and I had to grab it.

Eternal Sonata is an amazing RPG that originally appeared on the Xbox 360...read the description to see how cool it sounds:

On his deathbed, the famous composer, Chopin, drifts between this life and the next. In his final hours, he experiences a fantastical dream where he encounters a young girl facing a terrible destiny and the boy who will fight to save her. On the border between dreams and reality, Chopin discovers the light that shines in all of us in this enduring tale of good and evil, love and betrayal.

Seriously you are in the magical imagination of Chopin using Music themed attacks and weapons. I wanted it on the PS3 because it is an enhanced version:

While looking pretty close to the Xbox 360 original, the PS3 version of Eternal Sonata will feature a number of additional elements. New events are being added, to help give players a deeper understanding of the storyline.

The game will also feature new playable characters. Crescendo and Serenade, who played a major role in the 360 version's storyline but were not playable, will now be able to take part in battle. Crescendo makes use of a mace and shield. Serenade is all about her heart-shaped staff. She's such a girl!

Those who love the game's characters will want to pay attention to this next bit. Bandai Namco is also working a costume system that will allow you to freely change your characters' costumes. Accompanying this is an increase in costume variations.

I am pretty excited to start the game, both because I want to play it and because it is safe to play around the kids (more play time). 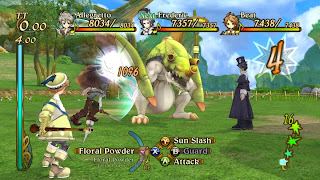 I started X-Men Origins: Wolverine - Uncaged Edition last night and I have to say it is really cool. It isn't really that innovative gameplay wise, at it's heart it is God of War with Wolverine. But his claws cut through everything, peoples arms, legs and heads get cut off and his quick kill moves are spectacular.

The coolest thing by far though is the healing factor. Wolverine has two health bars, one is basically his exterior health, when that is depleted you can see his vitals. The next health 'bar' is his vitals, if it depletes Wolverine is out of commission. He heals and is harmed in real time and the effect is really, really cool.

I already found the Lost Vault (earlier post), I am excited to see what other hidden things there are. It's good mindless fun and the production values are top notch. 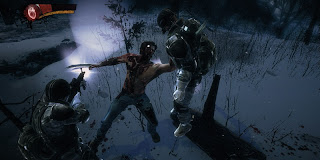