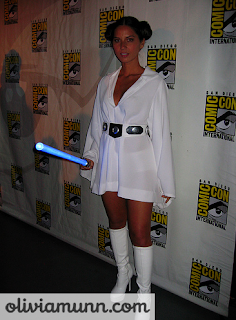 She recently attended Comic-con and underwent many costume changes as she performed at the show. I say performed because she knows she is a geek sex symbol and if she was not being paid she would not choose (I am sure) to walk around in various states of undress at a comic book convention signing shirts and hands of all the sweaty man creatures at the Con.

Having said that Olivia Munn does seem very sincere and very quirky, on her site she has many video segments as she was followed around for the entire 48 hour convention by a camera crew. Entertaining stuff and you could see the strain of being friendly when being swarmed at all times was getting to her a bit. Well worth watching even to see the behind the scenes look at a celebrity as they hit one of these conventions.