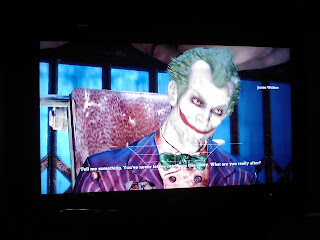 Batman: Arkham Asylum is the love child we have all been looking for in a Videogame. Paul Dini wrote it....and the the kids show restraints were removed. He has crafted a brutal, gritty and very edgy Dark Knight vibe that has plenty of dark twists and nasty secrets. From historical patient recordings, to Jokers taunts of Batman, to the mass murder of guards and inmmates this game features a dark Joker that we love to see. Mark Hammil is at his absolute best voicing the joker on this game, I have never heard him so engaged as the character.

The game looks, plays, sounds and is simply GREAT. There is stealth, puzzle solving, 100+ riddlers from the riddler to solve, great dynamic fighting system, plenty of gadgets and bios to enjoy. If you have a PS3 or a X360 you must own this game. Walmart is selling this game for today and tomorrow for 38.83, after that it jumps to 69.99. This game is averaging 92% in ratings, one of the highest (if not highest) ranked games of the year.