Skip to main content
on August 03, 2010
The Chronicle of an East Coast Vacation - Part 1 - Lunenburg

The girl and I just returned from an amazing vacation to the East Coast of our beautiful country. Specifically Lunenburg and Halifax, both amazing places and very different from each other.

The trip was planned some time ago with the general plan being to stay at a house in Lunenburg with her family and then move on to Halifax for a few days then head home.

We flew to the Halifax International Airport Wednesday night (28th) and rented our car from the cheapest option I could find, Avis. To our surprise we were given a Prius and began the somewhat long drive (in the dark). The car was pretty cool and it was nice that my lovely companion was driving, I could then be free to navigate badly (she is an amazing navigator, I am average at best). After a few mis-turns we made it to the house (a large red one, aptly named the Red House) after 12:30 AM Halifax time. 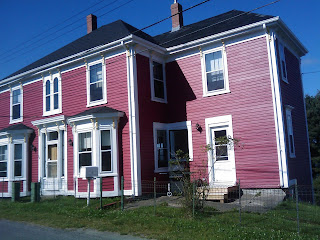 The next day we decided to try and get a lot of fun out of the day and started with a great brunch and then headed into Lunenburg to see the sights. We decided to try out the fisheries museum wondering if it would be any good. In fact it was really fun, they had a number of vessels you could wander into and a lot of information about the coast and Lunenburg. It was pretty cool to see crew quarters in an old trawler, see the captains cabin and what it was like in these vessels. There was some really interesting talks about the Lobster trade, how the area was fished out and even how whaling was a big part of the area many years ago. The museum was a great time and highly recommended when visiting the town.

Later that day we explored part of the surrounding area and went to a place called Blue Rocks, described as Peggy's Cove without the commercialism. It was a really nice area, very rugged coastline, and a ton of crabs around. We even found a crab graveyard of sorts and recovered a pristine, yet hollowed out, crab head. It was a very serene area and a nice quick stop. 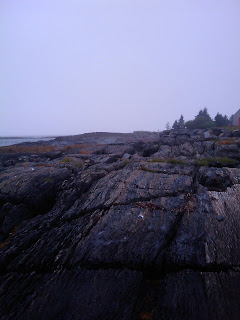 Later that night we had a bit of a long trip to a town called Hubbards for a Lobster dinner at a somewhat famous place called the Shore Club. This was to be my first time trying lobster (and mussels) and I was excited and unsure. I was told I would love it and I have to say I did. The restaurant itself was pretty cool, very no frills but a great deal and amazing food. With every lobster meal you have unlimited salad/pasta and mussel bar which I availed myself of quite a bit. I tore apart the lobster with help and I have to say I really liked it. The claws were my favorite, the tail removal was, err, interesting but the experience was really fun.

We decided to see the 'night life' of Lunenburg that night and found our way to the one bar open late, the Knot pub. A really nice little place with it's own custom beer that was smooth and tasty. After that we wandered to the only late night eatery and I got some amazing ice cream (it was that good). We then retired back for some much needed sleep.

The next day we slept in a bit and then headed into town for a bit to explore some more and decided to go ahead with a Whale watching tour we had been looking up. This was a 2 and 1/2 hour trip that was a lot of fun. It wasn't wall to wall whales, but we did track and follow a couple of Minke Whales. At one point the whale did go under the boat, I missed a picture of it, but seeing it up close (say 10 feet away) was very, very cool. The girl and I had an amazing time on the boat, it was so amazing to be on the North Atlantic and just enjoy the day and surroundings. 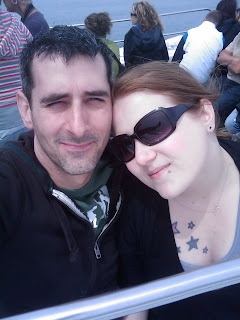 We burnt under the sun that trip, but it was worth it. Aside from seeing whales, porpoises and seals we were also treated to a scenic trip around the coast of Nova Scotia, we passed through a chanel with crumbling lighthouses, past major ports and we saw a natural phenomenon called the ovens. A series of 17 caves hollowed out of the cliff by the force of the ocean, people can (and did while we were passing) dive from the the walkways and swim into the caves. Very amazing to see up close.\

having not yet been to an ocean beach the next stop was at a really nice beach in the area called Hirtles. All of us headed there and quickly set up camp, dropped to our swimsuits and wandered into the water. I then wandered out fairly quickly. It was damn cold, the kind of cold that feels like bricks slapping against your legs. Unlike me artificial (girlfriend) stayed in the water and managed to move to her waist. I wandered back in and took it (somewhat) like a man. I got my goggles on and made it chest deep, the waves were a couple of feet high so jumping and swaying with the water was necessary. I finally dived into a wave and enjoyed that a few times. Wandering in I dried and warmed myself and then went in for one last soak, all he while artificial was still frolicking. She was beet red when she was done, but exhilarated by the feeling. She was so beautiful at that moment and many others on the trip. 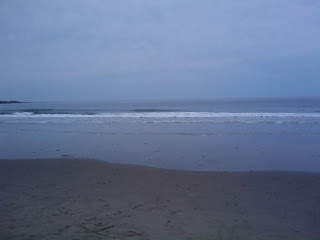 The rest of the ocean side trip was taken up with wandering the beach, tidal pools and rock formations. A beautiful place and the beach to hit if you are in the area.

Later that night we had a great dinner at the Red House consisting of steak that I cooked (yikes), scallops, salad and potatoes. Oh and two and a half bottles of wine. We ended up staying around the table chatting with my girlfriends dad till quite late. He has some great stories and it was a nice night of tales and drinking. Not quite tired my lovely girl and I wandered around the area and eventually settled in the backyard with beers while we used an iPhone app to track constellations. We were eaten alive by mosquitoes, but it was well worth it, a great night to end the first leg of our trip. 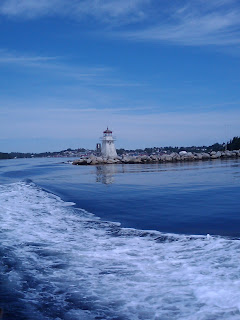 The next morning we packed up, said farewell to her parents and brother and started off on our solo part of the trip, see below for a slide-show of the pictures of the Lunenburg area. I'll post the second half of the trip soon.