Skip to main content
on September 14, 2010
I was incredibly excited for Dragon Age: Origins and I did have a lot of fun with the game, but it was completely ruined by playing Mass Effect 2 in the middle of it. Mass Effect 2 was so much more polished, complete and slick that Dragon Age ended up looking clunky and clumsy once I returned to it.

It is a shame because the core game has potential and the world itself is truly amazing. I am hopeful that the more focused experience the sequel is offering will bring it to the level I was hoping to see. Regardless I played a shit ton of the game and am at the very end with no interest in playing the DLC (maybe Awakenings, but not at the current price) so this is the end of the game for me. The problem is the final boss. 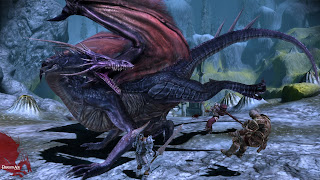 All through the game you can approach battles in a strategic sense and generally you can find tactics that work against the groups you are facing. Whether it me a melee rush or a pre-planned spell blitz, if you thought ahead you could succeed. The Archdemon is a huge and very mean Dragon that can only be killed with sustained pounding. I have tried the fight many times (and saves can only be done before going to the keep which is VERY annoying) and it always ends the same. My party dies one by one and then after much attrition of health my main character dies.

This departure from the ability to plan and strategize really annoys me and feels like lazy design choices and is very disappointing. I will finish it, but expected much more from the game...plus as I mentioned it is a really, REALLY ugly game.