Skip to main content
on January 25, 2011
I had an EBgames gift card and when I was making a pre-order I saw the recent game Singularity reduced to 10 dollars. I had heard mixed things about the game but for 10 dollars (and just enough left on my card) I figured why the heck not.

I found myself with a few hours free and dug into the game. The premise of Singularity centers around a new material called E-99 that was found in the 50’s era USSR area and experimented upon. The material was found on an island and a research base was founded there and shuttered after a huge E-99 related explosion killed everyone. You are an American soldier on a black op to investigate weird satellite interference centered on the island. 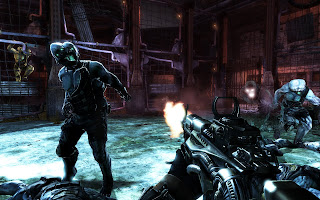 Once you land you discover that the island is devastated but still carries some secrets. E-99 has practical temporal related applications and an aftereffect of the explosion rips you through time to the 1950’s where you stumble upon and save a military scientist named Demichev on the island. This scientist was an amoral and ambitious co-lead on the E-99 research and by saving him from his fate you change history. When you return to the present the world has changed and Russia, using E-99 tech, has become the ruler of the world’s government under the rule of Demichev.

The game proper has you trying to restore the balance with the help of the main E-99 scientist and a device called the Time Manipulation Device (TMD) that straps to your wrist. The TMD allows you to age and renew objects that are imbued with E-99 as well as age organics as well. Over the course of the game you can get upgrades that add other abilities like a zero gravity, time bubble and other feats. The game is quite good across the board. 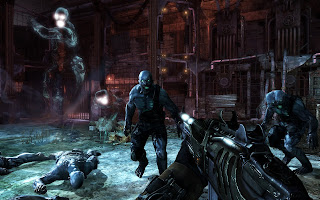 This is a time related game and obviously can get very convoluted especially as there are a few points that you go back to 1955 and perform some objectives. Thankfully the story is very linerally given to you as you frantically move from area to area. The story itself is solid though, you are faced with a world ruled by a sadistic Russian dictator who instead of promoting a unified peace continues to pursue unlimited power. Meeting up with the other scientist (Borislov) you are tasked with destroying the facility before the technology is used for war and restoring the timeline. On the way you meet a freedom fighter named Kathryn who works with a group called Mir-13 and she assists you on your way. Kathryn is killed during a mission and you and Barislov continue your plan alone.

The game gives you one choice late in the game but aside from that your hand is held through the whole game which is a bit of a shame. A bit more options or the ability to impact or alternate the story slightly earlier in the game would have been nice. But that being said the story was engaging and I quite liked the ending I received which throws you on your heels a bit and has some neat tweaks over a scene from earlier in the game.

This is an Unreal powered game and while it is not Uncharted 2 or Mass Effect level of beautiful it is a pretty great looking game. The real shocker is how stable the game is. I played it on the PS3, which usually suffers when the Unreal engine is used, and it was rock solid with none of the tearing and draw-in problems I have seen in other games. 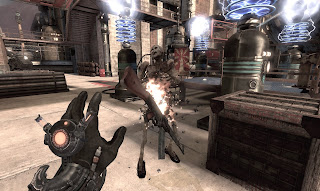 The look of the game is not terribly original with military installations, forest areas and villages being the norm in this game. But the look of the enemies and environments are quite well done and actually has a neat look many of the times. The temporal effects of aging and renewing objects is very cool and well done as is all of the weapon effects. It is very cool to see a damaged bridge or decayed box and rebuild it (basically you are rolling back the clock on the object) so you can cross or open the box. There are a lot of little touches like faded blackboards you can renew or odd light filters when time is distorting. The game was a pleasant surprise graphically and the Russian themed look was quite well done.

The temporal related disaster created mutated creatures that phase in and out of time and Demichev has sent soldiers to harass and stop you. These forces battle each other and are well represented and very aggressive in attacking you. The game frequently closes the door behind you when you enter an area which forces you to keep battling head on instead of retreating and taking your time. You are given a series of weapons and the TMD’s various functions and you are off to the races.

The gameplay is run and gun refined with a twist. The weapons are pretty generic but capable, you can equip 2 at a time which does limit your choices. Thankfully the developer (Raven) stole some components from Dead Space, namely the weapon customization and TMD customization. In fact it looks like they lifted it wholesale from Dead Space right down to the expanding machine as you activate it and the holographic display. These weapon lockers let you equip any of the weapons anytime you interact with the locker. You can also upgrade the weapons but that needs weapon tech which is hard to come by (like nodes in Dead Space).

The TMD can also be upgraded and you can buy a number of perks from your TMD or skillset as you progress as well. This adds a nice mix to the fairly generic weapon loadout and something to encourage you to find all scattered E-99 tech. The TMD is neat to use if somewhat hamstrung; imagine if you had the command of time itself? Well the game does and limits when and how you can use it. You can age any enemies as well as mess up the temporal creatures but this drains energy from the device so it is not unlimited. Scattered objects can be renewed or aged but not the entire game world. It adds an artificial limit to the freedom the device should have, but on the flipside the game needs to be challenging and directed, limiting the abilities is a way for that to happen. 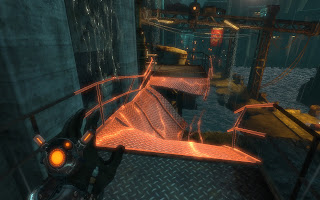 The game starts challenging, but as you progress and especially at the end when the TMD does not consume energy anymore (unlimited aging and renews) the game becomes VERY easy. I breezed through many areas and died very few times as I played through. This does make Singularity move at a brisk pace, but a harder challenge would have been appreciated. I am restarting in the now unlocked harder difficulties and it makes a true difference.

Despite being a fun, well written and good looking game Singularity failed miserably, hence the price cut to 10 dollars after only 6 months on the market. It failed not because of the game itself but mainly because of the publisher Activision doing nothing to market the game. They knew this would not be a Call of Duty as it did not have the mainstream appeal or brand they seemingly left it to die.

Aside from a few magazine ads the game was nowhere to be seen when it was released and it is a shame because Raven is a talented developer and the game clearly had care and attention poured into it. I am not saying it is an instant classic or game of the year contender, but it is a solid and enjoyable shooter with a twist that deserved a chance that Activision never gave it. At 10 bucks it was a great 7 or so hours and I recommend people grab it.