Skip to main content
on January 28, 2011
The Sony NGP is Drool Worthy

OK, I kind of take back what I said about Sony being stupid. I still think they should have teased the PSP2 or Next Generation Portable prior to the press conference but by God is this machine delicious!


There is a whole lot of Sexy in that list like the proper Wireless-N, the sixaxis gyroscope and accelerometer and three axis electronic compass, the GPS and rear touch pad. The biggest addition is the two analog sticks (!) this will enable proper full console like games to a handheld for the first time.

The other inmortant bits (and boy are they important) should be discussed with glorious pictures: 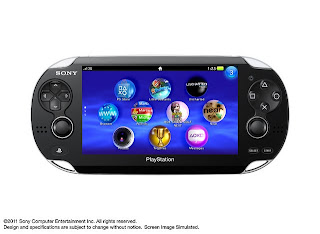 OK, the first look is at the front and is she ever sexy. Of note as mentioned are the TWO analog sticks, and I say sticks because by all reports they are not the painful nubs we are used to from the PSP but instead slightly smaller DualShock quality sticks. Other cool things are the PS, select and start buttons are on the sides (instead of bottom) and the front camera (!) A facetime style app and plenty of interactive technology becomes possible.
The screen deserves a lot of attention, it is a capacitive (read touchscreen) OLED screen weighing in at 5-inches and a resolution of 960 x 544. OLED is bright, has great viewing angles and uses much less power then a typical LED display. The touchscreen brings the ability not just for innovative NGP specific games but also all the great iPhone/iPad games from the past couple of years. 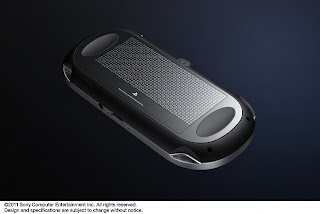 What can you say about the back of the NGP except WOW and wonder what may be possible. What you see is a multitouch, err, touchpad that from reports is comfortable and easy to interact with. Picture holding the NGP using the analog sticks to navigate, the two (much better) designed shoulder buttons to interact and the touchpad for additional control. The possibilities are amazing and a game already uses them in a neat way. In Little Deviants the environment is manipulated by where you touch on the rear touchpad.. As it is as large as the screen you can control the entire display surface. A rear (presumably higher resolution) camera is in the mix enabling augmented reality options as well as standard picture taking. 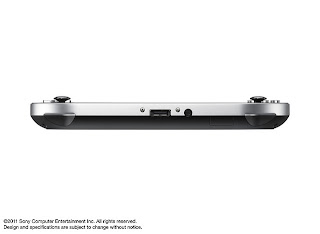 The Bottom of the NGP is fairly standard with no surprises at all aside from the fact that I could be wrong but that does not look like a mini USB port as seen on the PSP. Not sure what the little hole next to it and the seemingly removable tab to the right is. I do like the grips they have seemed to build in the bottom of the NGP. Every aspect of the design seems to take comfort and usability into account. 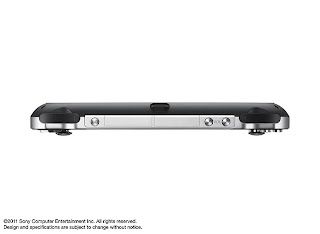 The top is more exciting, we can see the better designed shoulder buttons (with indents behind them) as well as the new buttons. The buttons for Power and volume are just that, buttons. They remind me of cell phone buttons but does raise a question, what about standby/sleep mode? On the PSP you could move the slider to standby or off, here there is just power. Hopefully there is a standby mode accessible via the PS button? Maybe a 3DS style suspend mode?

This view also give a good look at the analog stick profile. Just looking at the image lets you know these are superior to the nub on the PSP.

So there you have it, the NGP is crazy spec and feature wise and has all the capabilities anyone could want. Already games like uncharted, Call of Duty and Killzone are getting the NGP treatment and with the ability to generate so many tactile experiences the games on this device can be outstanding. It is supposed to launch by the end of the year and I cannot wait for more information.

It is also worth noting that Sony will release games both on flash cards (brilliant and something I have been asking for) as well as digitally. If they can swing a proper 'app' store like iTunes this could be huge. The lack of a disk drive will greatly improve load times as well as battery life (which should be equal to the PSP).

Here's hoping they will have some at PAX East to try come march!