Skip to main content
on October 24, 2014
My continuing thoughts on Destiny.

I have a lot of games, I mean A LOT!  Far too many really.  I would say I am midpoint through playing at least 40 excellent titles and have about 10-15 more I just haven't even started...plus older ones I want to get back to.  Just recently many amazing games have been released, Wasteland 2, Borderlands: The Pre-Sequel, Middle Earth Shadow of Mordor and Alien: Isolation to name a few.  But Destiny is one game I cannot stop playing, and it is actually really astonishing as that kind of multiplayer focused re-play style of game is something I tend not to enjoy or stick around for.

I often play a story mission, a strike, a few patrols and a couple of multiplayer matches a night.  Right now my focus is strictly on levelling my vanguard rank and taking out Guardians in the crucible just to unlock this exotic weapon: 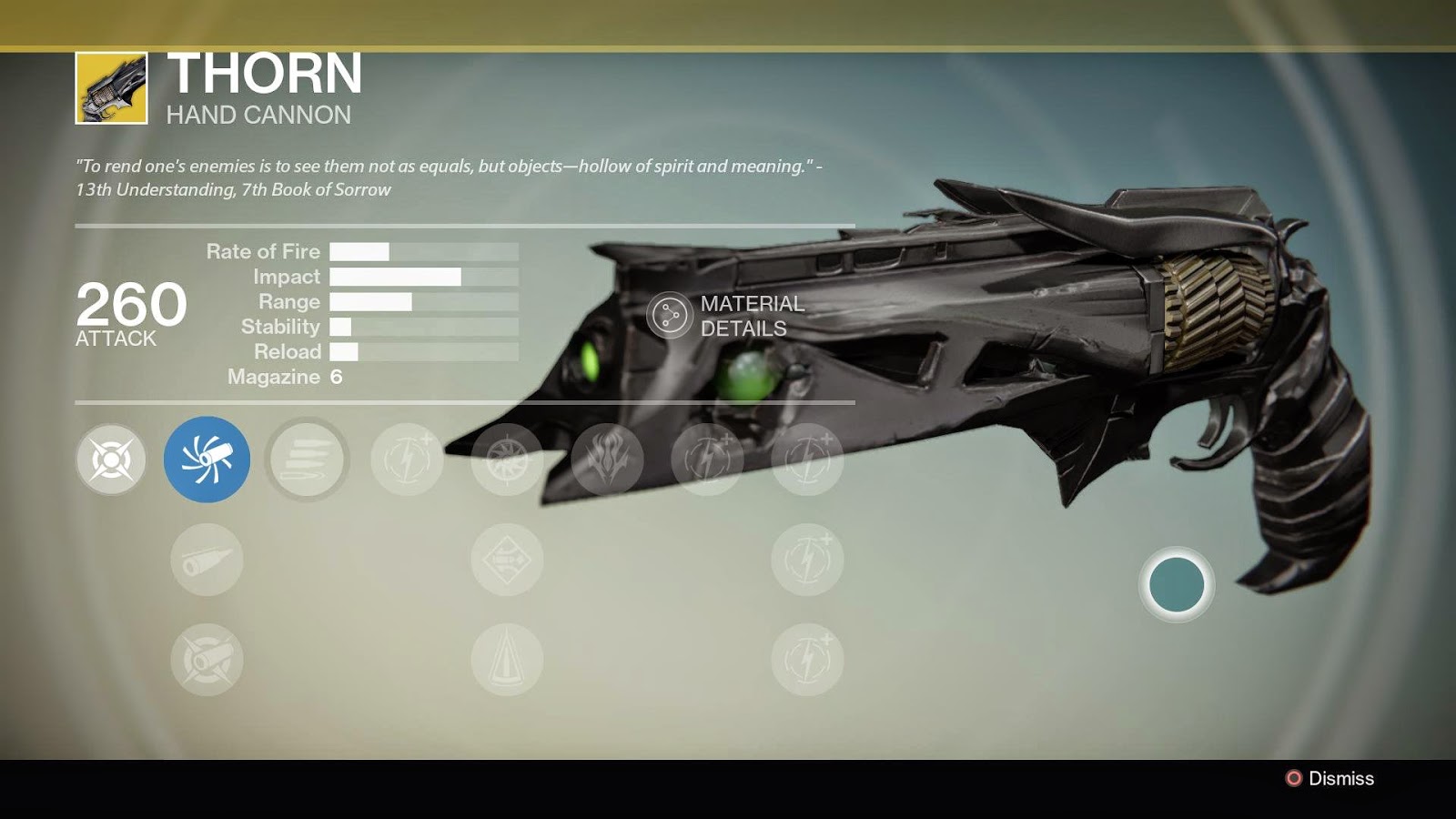 I am working through a really tough exotic bounty to get this weapon, currently I have to get 500 points by killing Guardians in the crucible using only void damage.  The catch is that any deaths set you back so you need to have a good kill/death ratio.  I am being really strategic when I play and have a void shotgun and heavy weapn but it is still a grind.  So why do I do it? Why do I keep playing when all other games that forced my hand in such a way turned me off?  Part of the answer is in my review for Destiny:

But deeper than than the fact that the game is slick, has great controls and plays buttery smooth, the game allows you to interconnect tasks that makes grinding completely addicting.  You have ranks you can get in certain factions, the base vanguard faction, a clan faction and when events like Queens Bounty and Iron Banner arrive you can also level in there as well.  The trick is you can only accrue experience in one at a time.  If you equip a standard cloak (or whatever the equivalent is for Warlock/Titan) you rank Vanguard, if you wear the Queens cloak or Iron Banner or Future War Cult colors then you rank with them.  You care about this because each of them have somewhat unique legendary items you can buy, but only if you achieve a certain rank!  This inspires you to level up so you can buy Legendary items which is much easier then waiting for them as drops.  I am currently Rank 2 in FWC and nearly rank 2 in Vanguard.  The goal being having all Legendary items equipped.  Why?  So I can level up.   Past level 20 you can only level by equipping items with light points, the Blues have decent points, but Purple Legendaries are better and Yellow exotics obviously the best.  To achieve level 30 you need the killer gear. 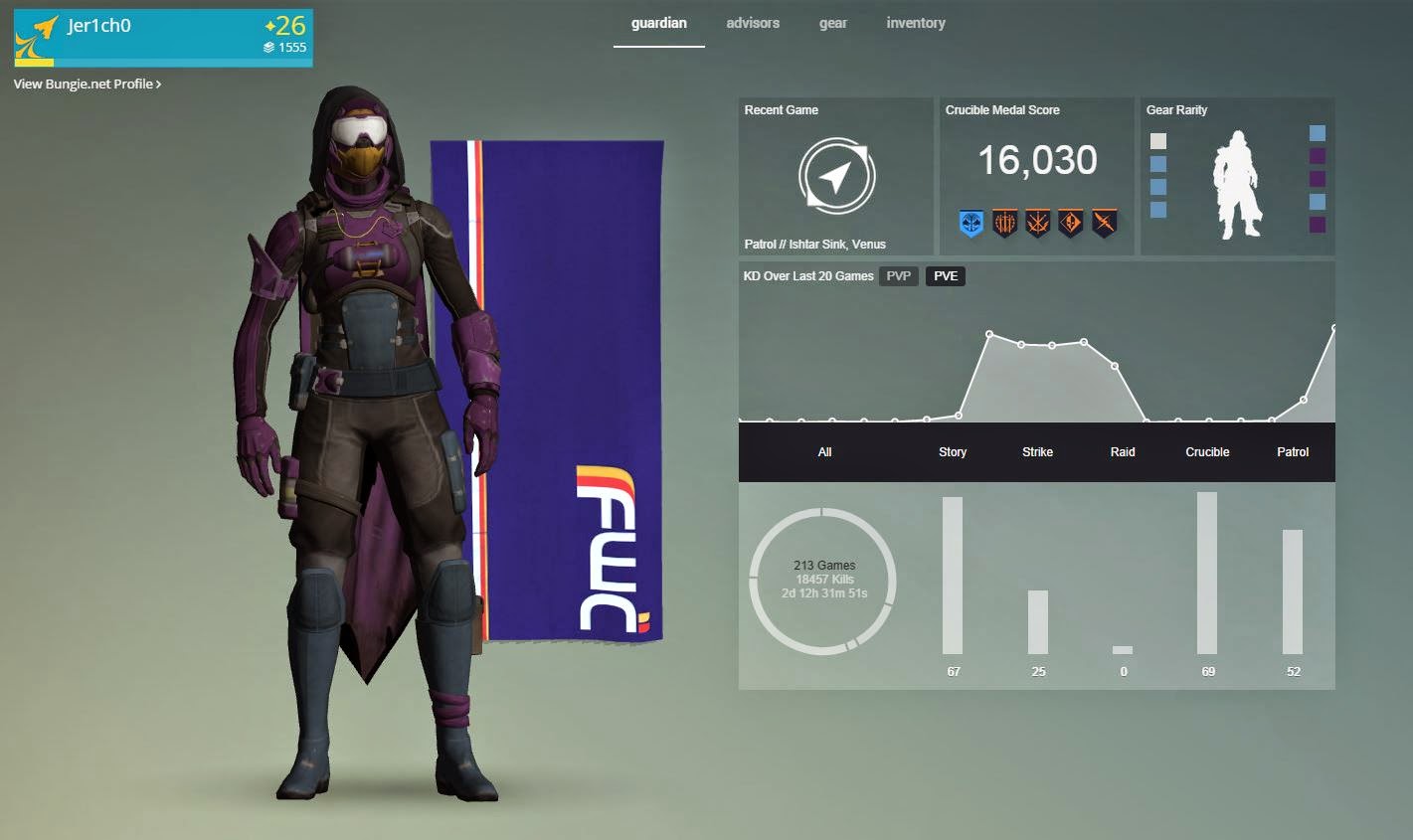 So Levelling is one reason to grind/play, but that would not be enough.  In order to make me want to do it Destiny has bounties which to me ties everything together.  I know I have to grind crucible matches to get my exotic Hand Cannon unlocked, so I take Crucible bounties as well, these could be melee 10 people from behind or kill 10 warlocks or take over 10 control points.  All of this reward me with experience (which convert to Motes of Light, which equals additional levelling and a currency).  By layering these bounties on what I already want to do personally it gives me that extra incentive to play match after match.  There are bounties for Strikes, patrols and other actions that make playing through the game sequences over and over rewarding on a continual basis.

Having all of these different goals, bounties are a way to keep me interested but Bungie also has daily story missions with extra rewards as well as weekly strikes and crucible matches with bonuses that sweeten the pot.  Plus the gameplay is just so damn fun.  I mean really flawless.  I have not enjoyed a shooter so much in ages, so much so that the gunplay in Borderlands: TPS seems frankly subpar.  Bungie has said that they will continue to grow Destiny and I see it in the content patches and Public Events.  I am hopelessly addicted to this game and frankly I don;t care, it is pure fun to me and I wish I was home playing it right now.