Skip to main content
on November 05, 2014
My thoughts on Borderlands: The Pre-Sequel


Borderlands: The Pre-Sequel is a neat tongue-in-cheek concept, featuring the rise of Handsome Jack and set just after the events of the original Borderlands title. It’s a sequel to the first title and a prequel to the second (excellent) Borderlands game, a cute and effective title. 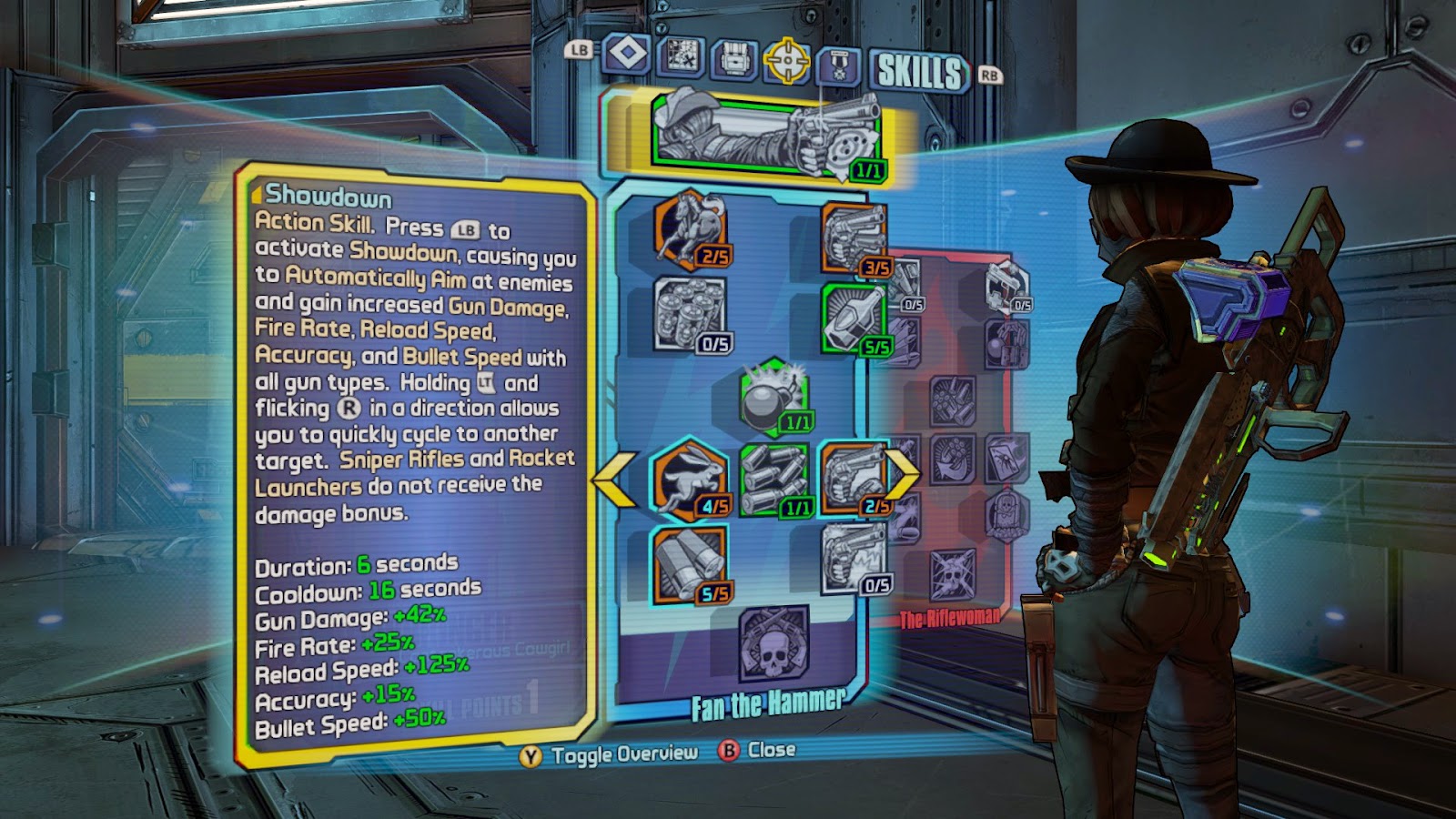 Those games were incredibly fun to play and hooked many a gamer (myself included) for many, many hours of crazy Claptrap-enhanced antics. So how do you make a new game sandwiched between the two original titles bigger and better? The answer seems to have eluded 2K Australia and Gearbox, as this game is competent and fun but just seems like more of the same.
Let’s back up a bit. The story of Borderlands: The Pre-Sequel focuses on a group of new Vault Hunters hired by Jack (not labelled as ‘Handsome’ yet), who is essentially a Hyperion middle manager at this point, to investigate a vault on Pandora’s moon Elpis. This being a Borderlands game, all goes to hell on Elpis when the Dahl Corporation steps in and hijacks the Hyperion station Helios and starts bombarding the moon (for some convoluted reason, in place just move the story along). Jack tasks the new hunters with helping take over the station and stopping the Dahl incursion. Zany antics, weird plot twists and diverse locations are featured as you fight towards eliminating the Dahl General and placing the station under Jack’s control. 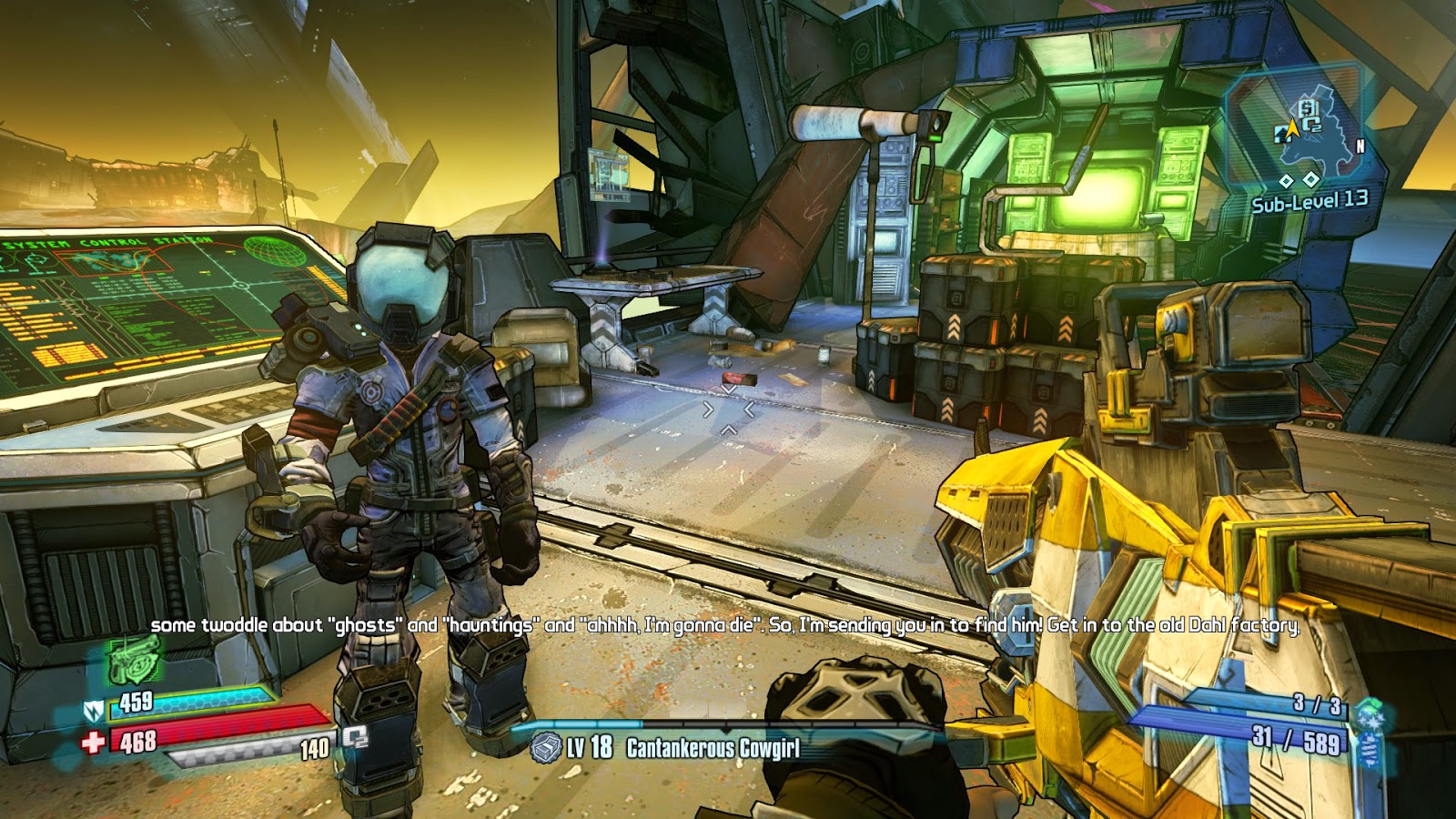 The characters from both previous games make appearances as allies and narrative devices, relating their stories about the rise of Jack and the part they played. This is a really interesting hook to tie the games together. The game has one of the characters being interrogated by the original Vault Hunters and relating their side of the story as it plays out during the course of the game. The voiceover narrative gives your characters perspective on events and fleshes them out in a really creative way. I really enjoyed seeing Jack’s transformation as well: he starts as a person seemingly trying to save Elpis while getting ahead in Hyperion, but discovers (and embraces) his sociopathic tendencies as he is forced to get his hands dirty. From a story perspective I quite enjoyed the journey, especially the anecdotes from my character, Nisha, as she progressed. 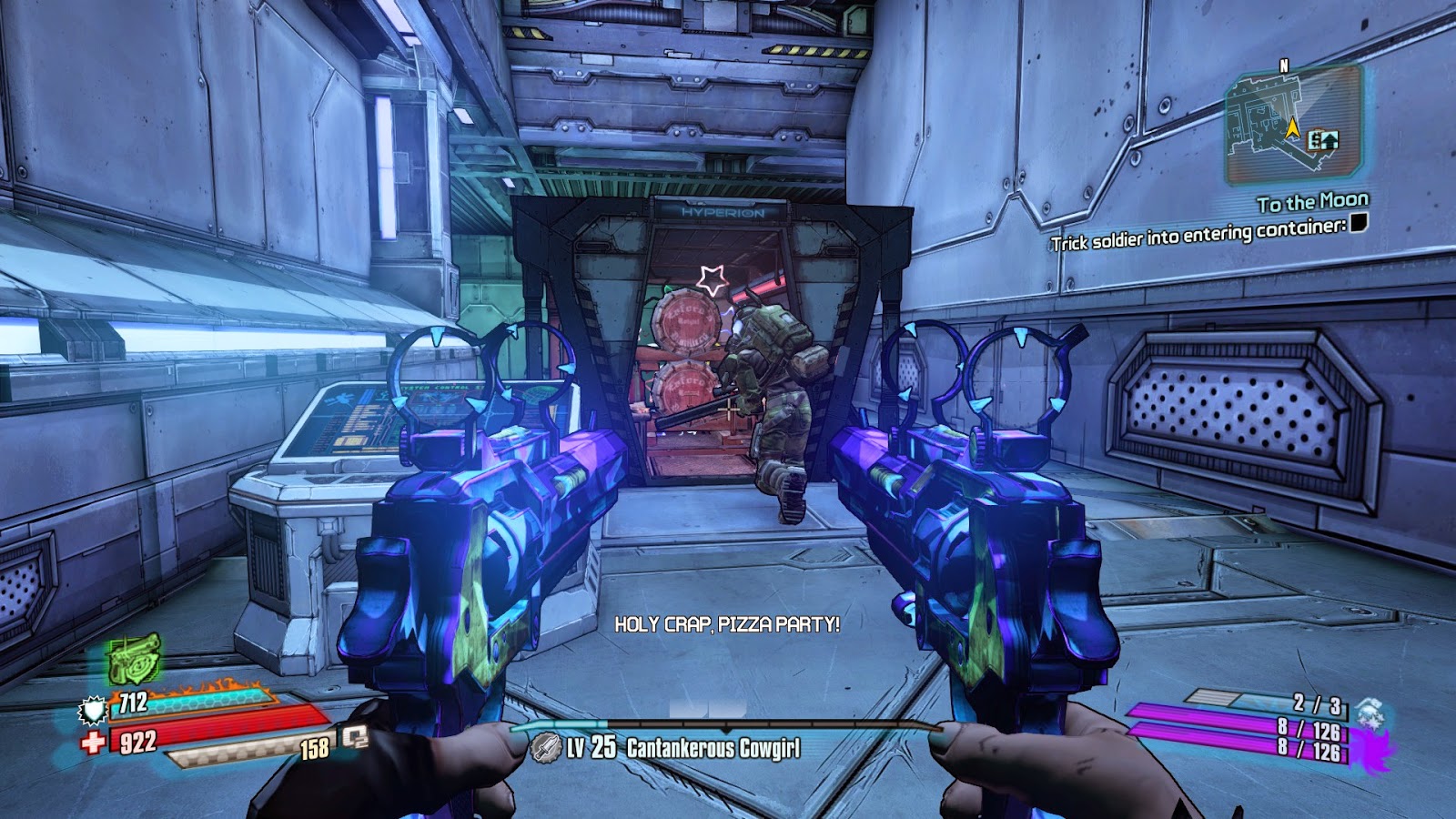 The gameplay and progression aspects of the game are certainly capable, but this is where I would have liked to see much more growth in the franchise. They have added a number of new tweaks, such as low gravity, butt stomps, an air canister-equipable item, and lasers that have different firing modes, but the core game is exactly as it was in previous installments. You get a mission, you try to solve the problem, it doesn’t work, and you have to go elsewhere to try a different solution, rinse and repeat.
The game has a large number of story missions and sidequests, but the challenges usually boil down to this: Go somewhere, kill things and hit a button, go somewhere else, kill more things and wait for the action to have an effect. I am not saying I have an answer to what else they could do, but the format is getting a little stale and more variety in mission styles and challenges would have been appreciated. 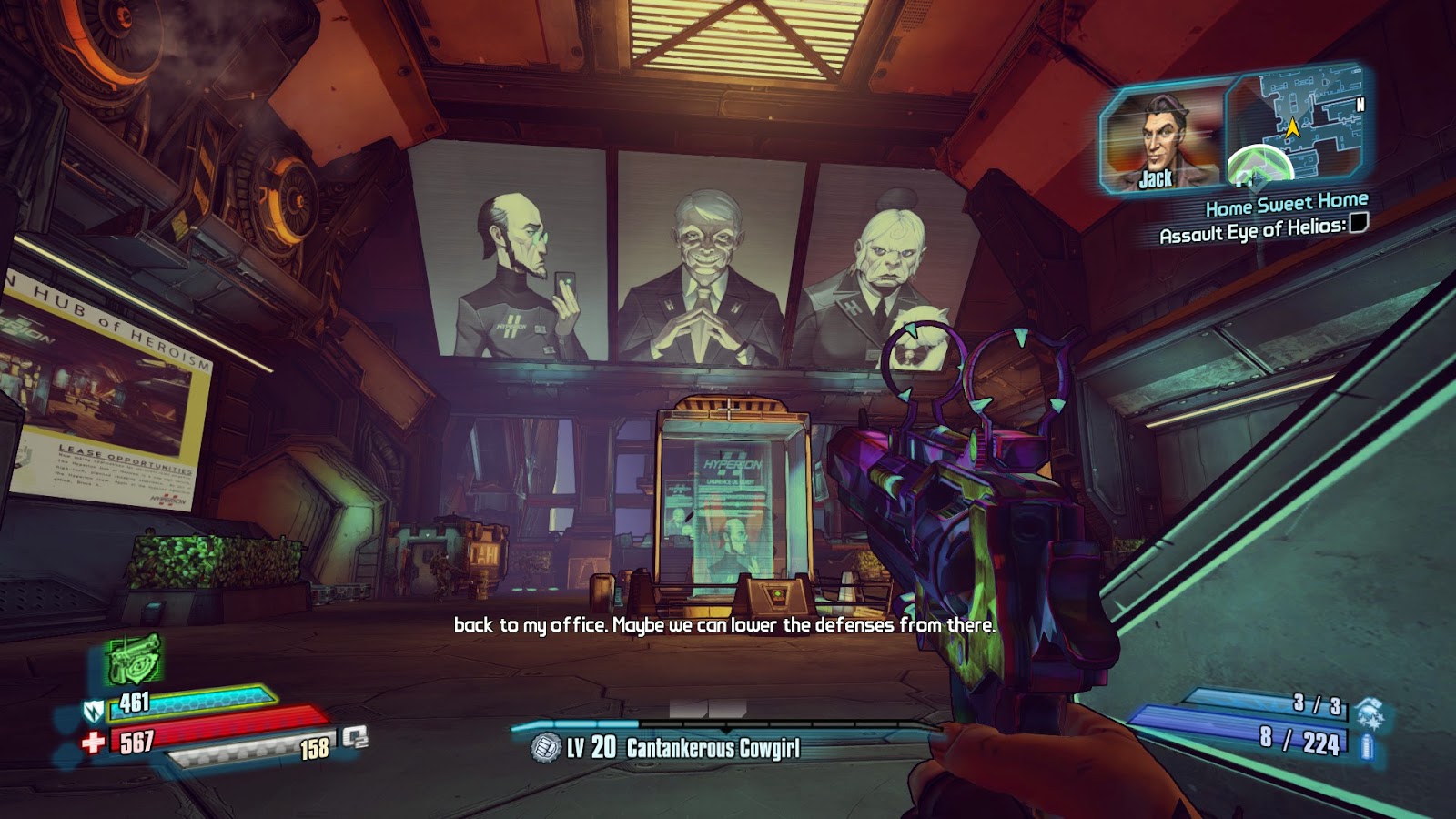 Thankfully all of those little tweaks the developers added do mix things up enough to make playing through Borderlands: The Pre-Sequel generally very enjoyable. The biggest and most appreciated addition is the low-gravity situation you find yourself in; jumps are higher, and you can glide to increase distance and butt stomp when you are surrounded and need a breather. The benefit to transportation from the higher, longer jumps cannot be overstated.
With all the back and forth required in these games (remember the mission structures are still generally fetch quests), the ability to actually enjoy moving around makes a big difference. There are vehicles again, but the game often gates you away from using them or has whole zones without them, so having this faster and quite frankly fun transport method makes a big difference. 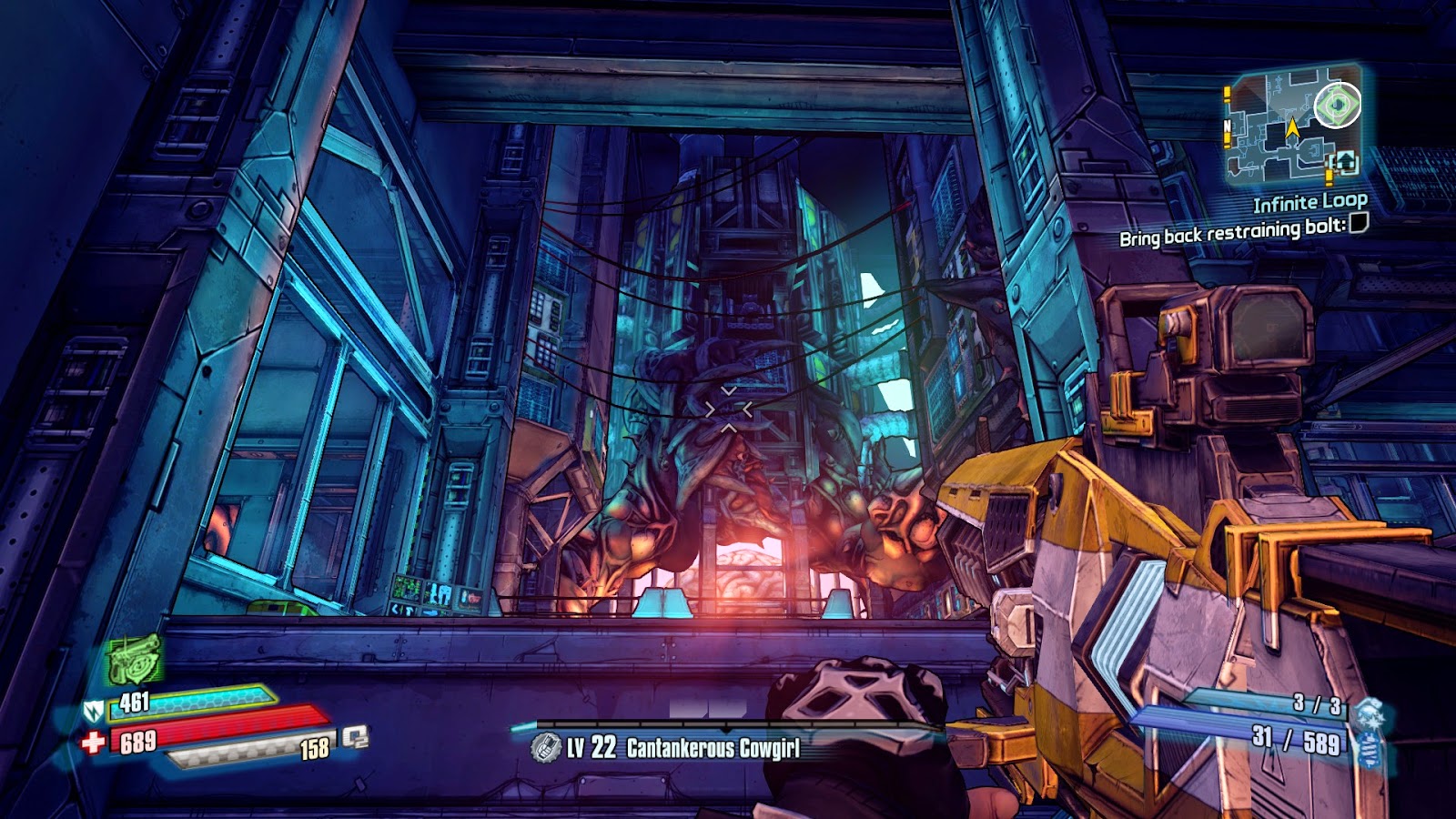 The extra item you can equip is an air canister, and these have varying abilities such as extra stomp damage, quicker recovery, and extra air supply. This adds another layer of tactical thinking as you need to plan your air reserves, and the butt stomp can be a life saver when used effectively. Air pockets, generators, canister drops, and vents are numerous so your air supply is rarely an issue, but it is a nice tweak.
The new gun type, lasers, are quite interesting as there are some that fire bursts while others fire a continuous stream and all have elemental attributes. The lasers actually become the focus of a fun sidequest as the infinitely humorous Torque hates them because they never have explosive abilities (which are his speciality). The lasers are fun to use and add a new dimension to shooting that is not necessarily groundbreaking, but does add a tweak to combat that is appreciated.
Borderlands: The Pre-Sequel features some of the original characters, but all four playable Vault Hunters are brand new as playable characters, but are returning faces from previous games in one form or another. Wilhelm is the first major boss you face in Borderlands 2 and he is the Enforcer or Assault style character. He is interesting in that he slowly keeps adding parts as he levels closer to becoming the enemy you faced in the, err, sequel. 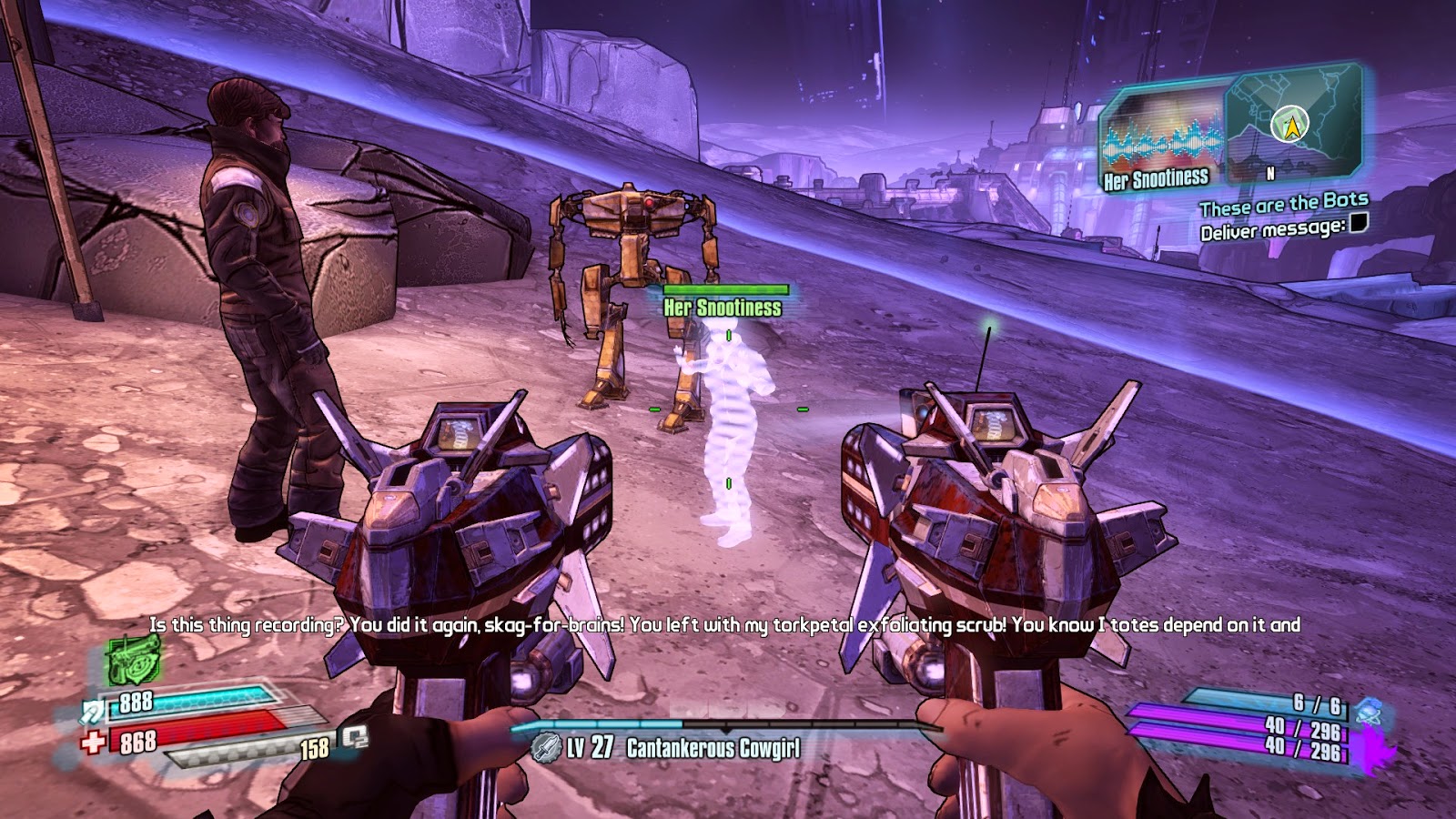 ClapTrap the Fragtrap is the crazy CL4P-TRP droid that follows you through all the games. This time he is armed and psychotic with his special ability randomizing to often hilarious effect. Athena is another interesting character, pulled from DLC from the original Borderlands. She is basically Captain America with a gun and shield, really as awesome as it sounds. The final character (for now; Jack’s Doppelganger will be added as the fifth playable character) and the one I played through the campaign with is Nisha the Lawbringer.
Nisha was the Sheriff from Lynchwood in Borderlands 2 (and in a relationship with Handsome Jack at the time of that game), and she is the sharpshooter and quick-guns character. I have only dabbled with the other Vault Hunters, but Nisha I know very well. One of the cool things about Borderlands: The Pre-Sequel is that the characters interact with the story; your character responds to Jack or the characters you are involved in all throughout the story. Nisha is snippy with Moxxi, flirtatious with Jack (and Janey Springs), angry at the world, and in general a really terrible person. The dialogue isn’t world-class prose, but it did serve to add depth to this character and actually gave me incentive to try the other characters through a complete playthrough which I had never done (nor wanted to) before in the previous games. In typical Borderlands fashion Nisha has three skill trees that focus on specific talents (sharpshooting, pistols, and law and order skills) and that refine how you play the game. The skills are well done and add nice depth to the game. 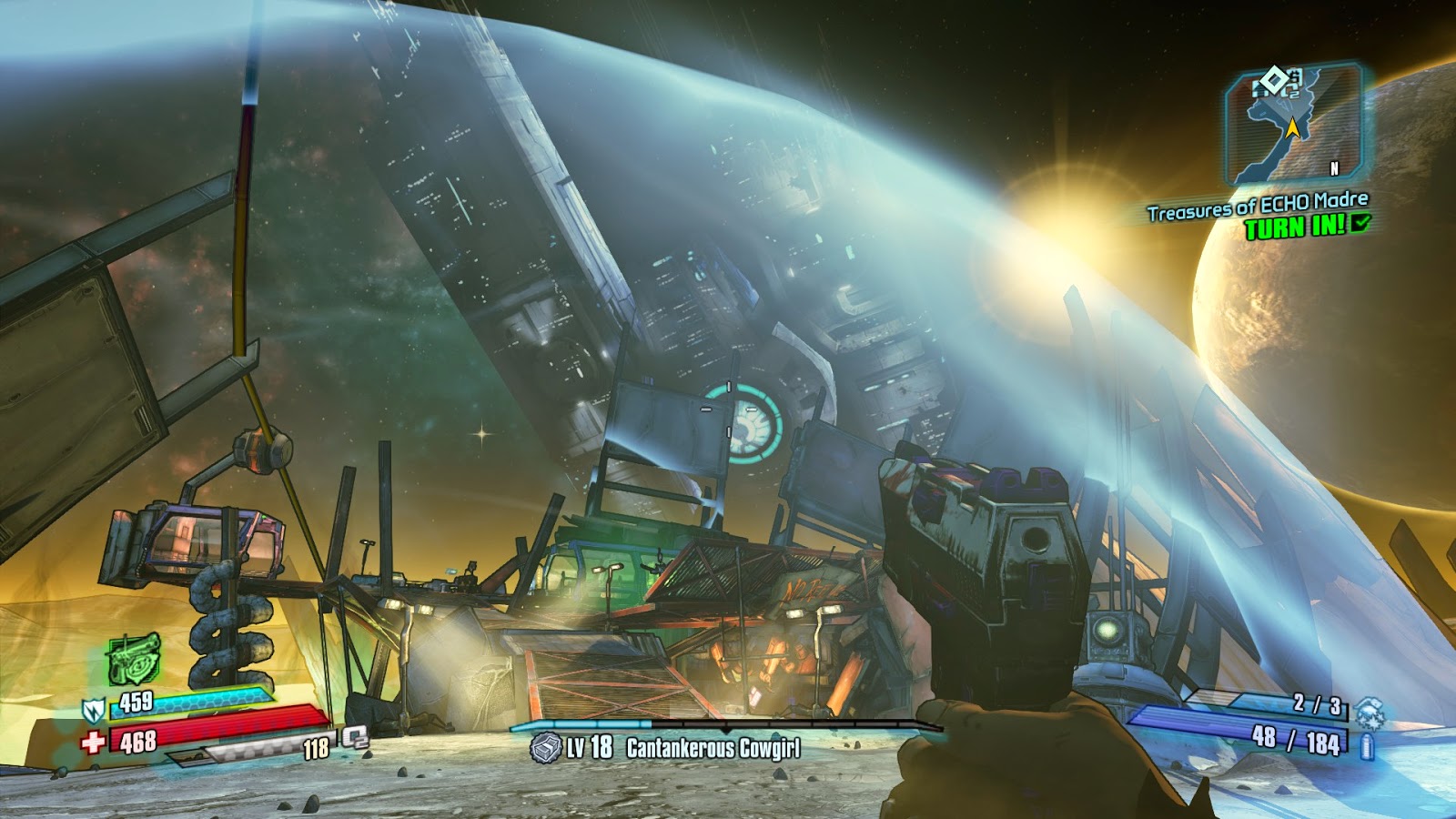 Borderlands: The Pre-Sequel on paper has a lot going for it and in fact the game is interesting and fun to play, but it gets repetitive gameplay-wise when you realize that it is the same old formula from the previous two games. The characters are interesting, the game looks fantastic, the weapons are crazier than ever, but there is a kind of fatigue that builds up as you play because you just feel that you have played this game already. It is really hard to describe; I like the game, I am playing the game and having fun, but I just feel that if 2K Australia and Gearbox had tried to innovate on the formula instead of recycling it they could have had a truly exceptional game instead of one that is just very good.
Borderlands: The Pre-Sequel is available on PC, Xbox 360 and PlayStation 3.