on March 11, 2020
I have said this many times but one of the best features of PAX East is the depth and breadth of gaming experiences, for every FF VII Remake there is a soon to be Indie classic like Curse of the Dead Gods. Reminding me of Dead Cells mixed with the risk/reward systems of Darkest Dungeon this game hooked me from the moment I saw it in action. 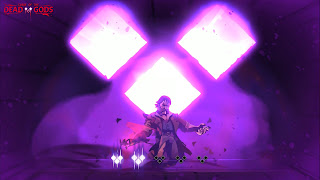 I had a chance to try it out on the show floor and then when I returned home as it just launched in early access and I am already addicted with the systems, art style, gameplay mechanics and sheer atmosphere.

Billed as a skill-based rogue-like for this game has a tortured hero exploring a dark temple filled with monsters, traps and curses as well as untold riches, relics and weapons to discover. The game starts quickly with a snappy cutscene and then right into action as I choose a path through the temple.

This choice is usually in the form of what reward type will be available once the enemies or traps are cleared. It may be gold, stat increases, new weapons or a surprise choice.  As this is a rogue-like every time I died the journey started over but any skulls I found or perks I unlocked stayed with me.


So while my weapons restart to basic items I may have more starting gold, or do more damage with fire or extra starting stats/hitpoints. There are many perks and enhancements that can be unlocked as skulls are gathered and these carry over on each playthrough.

As the levels are being explored though new weapons, stats and relics can be equipped to make battles easier to get past. On the flipside these bonuses are not free and have to be paid for with gold or the characters blood.  Using blood enhances the chance of getting a curse which adds both a perk and penalty. These curses can only be lifted once a boss is defeated so balancing getting new items with the associated curses is a calculated gamble.

Mechanically the game is snappy and responsive. Quick dodges and parry maneuvers help to get out of sticky situations and there are some fast combos with the base weapons of sword and gun. There are numerous new weapons to replace the starting items but also two handed weapons to be found as a third more intense option.

Dodging and using the two handed weapons drains a point of stamina (you start with 5 points) so there is a real need to keep an eye on that tally when backed into a corner. Traps are everywhere and many cannot be seen without light, either your torch or lit braziers. This means that keeping the room bright (a similar but different mechanic from Darkest Dungeon) is incredibly important.

Some traps also need to be triggered by lighting them or walking in front of them. These will explode, spew flame or shoot a fireball. Careful timing and movement can make this very handy to clear a large room. I would like to see more environmental damage types in future updates to spice this up, but these traps add a nice tactical layer.

The branching paths also give a cool choice in between every room to truly choose what is more important, weapons? Relics? Stats? Good old Gold? This is a nice tweak on the formula and reminds me of Hades a bit as it is nice to strategically choose how I power up.

I can’t be remiss either in mentioning how amazing this game looks.  The lighting, animations, textures and overall look and feel are stunning. It is nice to see this quality of art design that veers from the pixel art style (which I also love). The lighting is so key in this title and they nailed it with the implementation in this game.

Curse of the Dark Gods just released in Early Access and while I saw some odd glitches when hitting some function keys and had to restart overall the game is incredibly bug free so far for me. There are some placeholder sections (and one tab that literally says WIP on it) as well as menus that are not accessible but the game is already very content rich.

I used to sneer at the idea of Early Access but Dead Cells and Hades have made me love the format. Add to the fact that Baldur’s Gate 3 will launch this way and I can get truly excited about the release option. It lets us directly interact with the developer to shape the game, but only works if the original DNA of the title is good.

In the case of Curse of the Dead Gods what we already have is frankly amazing and addictive. I can’t wait to see what the developer Passtech Games has in store as they make regular updates.  Curse of the Dead Gods is available right now in Early Access on Steam.
action game curse of the dead gods dead cells early access game pax east paxeast 2020 rogue-like steam videogames