During this long journey throughout the Pandemic throngs of gamers ached for a return to conferences in one form or another. Lat year as a replacement to PAX West the very first PAX Online was held. I noted that the schedule was a little long and the sheer amount of content was daunting. This year PAX East is also going the online route and I found the opposite problem. 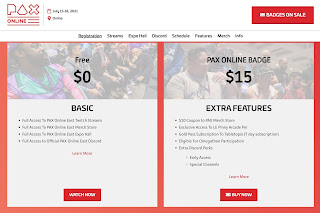 Originally planned tentatively as an in person event but delayed to July (PAX East is generally a March/April event) the decision was (rightly) made to shift to an online format somewhat late in the game. Further muddying the waters is the fact that the main show and all events were free to all but a $15 Online pass was also provided that gave a few perks (and a discount at the merch table).

This shift likely caused many people to pivot frantically and this led to schedules being released weeks ahead of the event (instead of the typical months we see for the in person conferences). I generally plan my schedule out very early and had to plan viewing streams literally the week before the show. 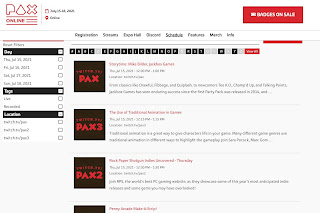 Further to the streaming schedule being delayed the virtual expo Hall and games featured were released the week of the event. This caused a mad scramble on my part to see what games were featured and start downloading demos or reaching out to press contacts for interviews/information.

In the end the content, as mentioned above was fairly light. There were four days scheduled this time following the actual PAX East schedule (As opposed to the massive 9 day event last year). The streaming was divided amongst four twitch rooms (one devoted to Arena gaming) with content running from noon to 11pm.

The stream schedule was not overwhelming and there were many gaps in the schedule. My assumption is that a lot of energy and panels were shifting towards the still planned in person PAX West happening September 3rd to 6th. I could not help but feel that PAX Online East was put together rather quickly as preparation for the next event will be time consuming. 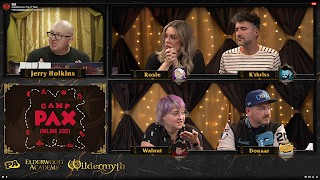 Regardless the schedule was very manageable and I enjoyed quite a few panels which I will cover in a future article. The content was varied and there was something for many people to enjoy. The benefit to these two online conferences is that Reed Pop and Penny Arcade now have a model they will utilize to enhance the In person events. They have mentioned they will have Hybrid experiences at the PAX West show which means more people can enjoy it than in years past.

The Virtual Expo Hall is another aspect if this online conference experience and I did find this one to also be a smaller experience but one that was nicely rolled out with a ton of great games to check out. What was interesting was the featured PAX Indie Showcase games were easy to explore an offered a lot of varied Indie games to discover.

There was nice integration with Steam and Epic Games store to offer the PAX Camp (the theme of PAX Online East) featured games their own breakout page. It made exploring the games easy and in many cases there were dev playthroughs streaming via Steam throughout the show. 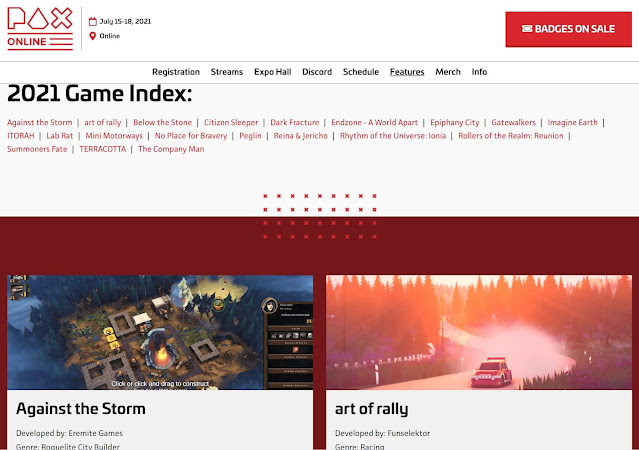 I had a chance to look at quite a few games and will discuss them as well in future articles but it was refreshing to see so many titles across many genres and from countries all over the world. Many small international developers hope this aspect of the online conferences spreads to in person events as it is difficult to travel across the world to promote a two person game.

Finally the cornerstone of PAX Online East is the limited time Discord channel. The main portal into PAX Online in theory is the online schedule and website, and it is fantastic, but the PAX Online Discord is where the real magic happens. 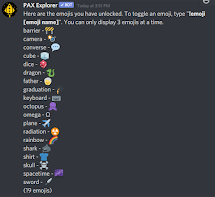 Discord is a live ecosystem and the PAX team has packed their Discord full to the gills with tons to see and do as the show is happening. The funniest bit is the Line Simulator channel that has a crowd of folks virtually queuing, chatting, balloon tossing and collecting emojis in mini games.

There are also sections for the many exhibitors, streams, merch, retailers the omegathon and many others. Being true to the real in person conference there is AFK and diversity lounges, handheld lounges for meetups as well as tabletop discussion sections where breakout games are occurring virtually.

The Discord server dedicated to PAX Online is unlike anything I have experienced before and that is where it gets a tad overwhelming. There are so many concurrent conversations and rooms that finding a spot to settle into can be daunting. I found myself flitting between the line simulator, expo hall and pax-explorer rpg as well as the new Media lounge room. 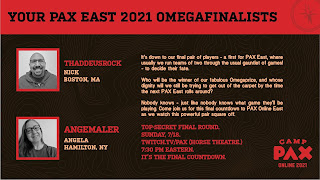 Overall I had a good if abridged time at PAX Online East this year. Even though I am fully vaccinated I am not quite ready to jam myself into a room with thousands of people (looking at you PAX West) so this was a nice alternative. My true hope is that the hybrid format sticks and extra streaming/online demo scenarios come into play.

If that were to happen then the conferences could exist for the next years to come in a format that does not exclude people still adjusting to the new normal. PAX often says Welcome Home, or that everyone is accepted, well now we are in a very different world and conferences like this need to adapt to make everyone truly feel those sentiments again.