One of the key aspects of each and every PAX whether in person or online in the new normal is the Panels. PAX has always been special in this regard as these discussions cover an incredibly wide range of topics and are hosted by people in and outside of the gaming industry.

As mentioned in my overview coverage of PAX Online East the schedule was quite light compared to the last online iteration but still had plenty to offer.  I checked out a number of panels covering a wide range of topics and I actually liked the focused smaller list as I did not feel overwhelmed by content. Full day streams are available to view on the official PAX channel if the streams were missed live.

This is a trademark of every PAX show and this one is extra special as one of the co-founder of Penny Arcade, Mike ‘Gabe’ Krahulik is retiring from attending the PAX shows.  He has been vocal for many years on how much anxiety travelling and attending public shows caused him and the past year caused him to make this decision. 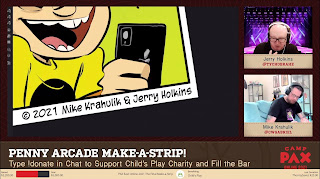 While this was the last Gabe and Tycho Make a strip panel it will not be the last as longtime Penny Arcade collaborator Kris Straub while be taking over live art duties starting at PAX West.  I made sure to watch this one as I have seen every single one at the last 10+ PAX East shows I attended and it was bittersweet to see this end of an era.

Despite the momentous occasion the panel was fairly subdued with Jerry ‘Tycho’ Holkins and Mike chatting and asking questions while Mike drew the strip.  It was a good one discussing the finale of Loki and as per normal they drew a hot dog fairy (which only appears in Make a Strip comics).

They only lightly addressed the changing of the guard and this being Mike’s last panel but I got the feeling it was a hard day for both of them.  It was great to see this last panel as it happened and wishe the team the best as Mike transitions out of the conference lifestyle.

This was an entertaining Panel looking at the design challenges and triumphs specific to puzzle games. This panel featured a great mix of panelists from across the industry: 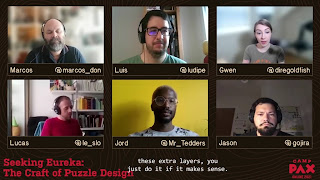 They discussed how they come up with puzzles, bouncing around ideas as a team, what makes a puzzle too hard and how to integrate them in interesting ways.  What I liked was that all of them knew they failed at some puzzle designs but learned from those issues.

It was a good look at a piece of the games industry that is essential to our engagement but is often divisive.  What came through loud and clear was how much each of these people loved puzzles and their design and it made for an interesting chat.

I really liked this concept for a panel looking at hosting gaming in libraries but also on introducing consoles and games to borrow to more libraries.  This panel featured two passionate speakers from different libraries looking at how the library is evolving to community spaces: 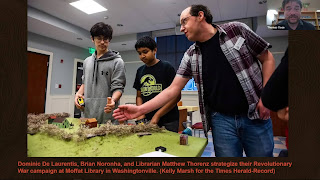 I had a personal interest in this panel as I lobbied the local Library association to start offering Mature games (they only had Teen and Everyone rated games). I argued that M rated games often feature very compelling and nuanced stories that should be offered at every Library.  I was pleasantly surprised when they acted on it and now we have all the latest M rated games for loan across my hometown of Ottawa.

The panel was really interesting as it takes the concept even further than loaning out videogames to hosting gaming tournaments for all sorts of games.  From tabletop to game design workshops the libraries across North America are realizing the kids can be engaged through this medium.

Both speakers where very passionate and showcased many projects and initiatives to make use of the community spaces to promote gaming.  I loved a lot of the ideas and look forward to seeing more of these projects roll out as the world realizes gaming has many social and imagination focused benefits.

Freelance Life: How to succeed in indie games

I casually dropped into this panel and stayed for the duration as this incredibly engaging group of professionals discussed the challenges and befits of freelance life.  Featuring a range of disciplines from around the world this panel had an impressive cast: 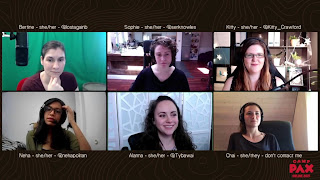 This panel looked at quoting, realistic scope acceptance and gender disparities in pay and recognized worth. There was a really great point where one of the panelists discussed that you should also quote higher than you think the job is worth as many people rate freelancers worth by how much they charge.

That set me back a bit and then I saw literally every panelist nodding their head, it was a surreal moment and one that made me really think about the complexities of contract work.  The other aspect was making sure to acknowledge the soft costs of licensing, office space, health insurance and other necessary costs to stay in business.

Another staple of the PAX experience is watching the main Acquisitions Inc. or the “C” Team play a live Dungeons and Dragons session.  At this event it was the anticipated return of the “C” Team, an offshoot of the Acquisitions Inc. group.  The team is composed of many walks of life and all seemed to be present in the same space for the live session: 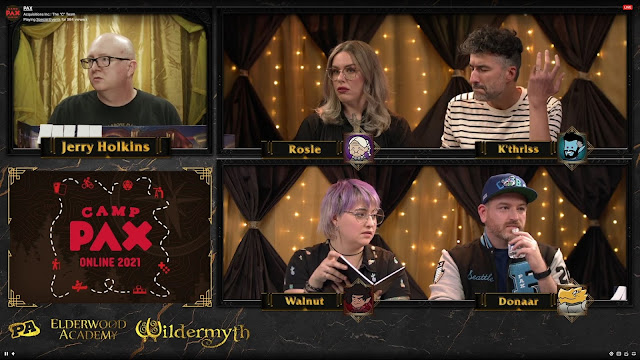 The session was as weird and wild as these usually are with close to a thousand viewers on twitch watching the show live.  The group knows each other and the characters so well that they can delve into weird interpersonal scenarios so easily.

This was a session to kickstart a new series of “C” Team sessions and it was clear that the crew was excited to play these characters again.  Because of the nature of the session there was not a lot of action per se, but tons of funny interactions and lore building.